In Memoriam: The Pre-ACL Bulls. A Guest Post by Kurt Scott. 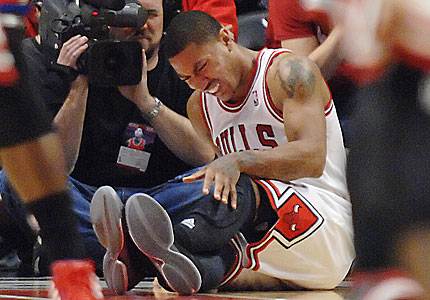 Editor’s Note:  The Diss is delighted to feature a guest post from Kurt Scott.  We wish it came under happier circumstances.  This is Kurt’s first contribution to The Diss.  He is a lifelong fan of the Chicago Bulls.  You can follow him on Twitter here.

In the waning moments of the Bulls’ first playoff game against the Sixers, Derrick Rose hopped into the lane, landing first on his right foot, followed by his left — those familiar first steps in the choreography of his trademark twisting floater — before his left knee buckled and he collapsed to the floor.

It looked serious.  Reggie Miller, working color on the broadcast, warned us that it probably was.  Only I didn’t believe it, not because the injury didn’t look nasty; in what’s become one of the most cliched sports observations, the non-contact knee injury is about as worrisome as it gets.  Still, a season of watching D-Rose suffer injury after injury had taught us two things:

1.  Derrick Rose’s body can’t be trusted.  Certainly not in this condensed season.  As much as we want our boy to be an every-game horse like Durant, Westbrook or LeBron, he just isn’t built for it.  And it’s not just this year; Rose’s oft-cited six missed games over his previous three seasons belies his history of dings, including but not limited to the ankle injury that slowed him for the first month of his sophomore campaign, a back injury in his third year, and a second ankle injury he suffered in last year’s first-round series against Indiana, after which he never fully regained his explosion against the Hawks and Heat.

2.  He eventually works his way back.  The road to recovery is fraught with setbacks, missteps and second-guessing, but because Derrick is a warrior, he eventually gets there, and having the chance to watch him at his most brilliant makes it all worthwhile. Which is why, for me, and I imagine most Bulls’ fans, watching Derrick writhe on the baseline was more of a “here we go again” moment than anything else.  Derrick Rose injuries are annoying, not serious.  They mean rehab timetables that are constantly revised by the Bulls’ brain-trust of coaches, trainers and front office personnel; they mean watching Rose labor to regain his conditioning and his confidence in his supernatural skills; they meant the possibility that we could — *gasp* — fall to the second seed; and perhaps worst of all, they mean angsty internal conversations wherein you remind yourself that it’s grossly unfair to be frustrated with Rose himself, as no one feels more betrayed by his body than he does.

Well, we were indulging ourselves.  We know that now.  Rose’s series of “minor” injuries didn’t make him more immune to more serious “freak” injuries, of course, it only gave us a false sense of security about his ability to bounce back, like clockwork.  And now that he’s facing a minimum rehab of six months, and the possibility that he’ll never be the same athlete again, we’re pushed into a new reality, one where we’re far more afraid of what’ll happen two, three years from now that what’ll happen tomorrow.

But let’s deal with the short term, first.

The Bulls’ title run is over.  Obviously.  And if we’re being honest with ourselves, it’s going to be hard to watch them play in this series (or, God willing, the next one and the one after that) without being sad as shit.  It’s a Catch-22: If the Bulls look awful in Rose’s absence, that clearly sucks.  And if they beat the Sixers and give Boston and the Heat all they can handle before bowing out, it’ll be hard to appreciate the accomplishment in its own light.  We’ll instead be distracted by what could have been.  And maybe this is just me being cynical, but I expect “what could have been” to turn into “what could have been avoided.”  In other words, more heat on Thibs for having left D-Rose in a game that was probably already in hand.

Look, here’s what folks are overlooking: though we all know that Rose’s body has been a ticking time bomb, the last thing, and I mean the last thing, the Bulls wanted to do was make Rose feel they were anything short of 1,000,000% confident that he could play hard and stay healthy.  It’s the playoffs.  The Bulls were only going as far as a fine-tuned Rose, in body and mind, would take them.  And pulling him from the game when they were up 12, with 90 seconds left, would have sent one message: “You will not spend any more time on the court than is absolutely necessary, lest you bust your delicate ass.” That’s a little incongruous with their other message, which was, “We need you to lead us to the summit of professional basketball,” no?  I’d say it is.

But anyways.  Blame games and dime store psychology aside, the title run is over.  For this year and maybe the next.  Maybe even beyond that, depending on how well Rose rehabs and/or modifies his game to his new athletic limitations (I just threw up a little bit in my mouth).  It absolutely goes without saying (though I’ll proceed to say it) that Rose has earned almost infinite patience from the fans and the front office as he works his way back to what he was, or discovers what he now must be.  A torn ACL isn’t the career-killer that it used to be, so a bit of positive thinking is in order, for as long as this is possible.

But staying invested in the Post-ACL Bulls will mean swallowing a few hard pills, some of which might go down easier if we embrace them now, before they’re thrown in our collective faces.

1.  The NBA hype-machine will turn the page on Derrick Rose.  To some degree, it already has.  The echo chamber (TV analysts, bloggers, fan forums, the twitterati) have used Rose’s 27 missed games in the regular season to give Chris Paul back his title as the league’s best point guard, and anoint Durant as “the guy we like with the best chance to beat the guy we hate” (it was D-Rose this time last year).  It’s a short-term memory league, and Rose’s cache will suffer for it.  To quote the late great Guru, for the next couple seasons there’ll be “no justice, just us”, bulls fans, when it comes to recognizing Derrick’s talents.

2.  Chicago will turn the page on the Bulls.  Every Chicagoan knows the Bulls are the hottest ticket in town…when the Cubs, Bears and Blackhawks (with their smaller but considerably more visible fan base) aren’t rolling.  And now that Rose is out, expect the MLS team — the whatever they’re called — to challenge as well, and for casual Bulls fans to go back to their default mode: ignoring basketball.

3.  You will be tempted to turn the page, as well.  Rehab is a hard process, even for those of us on the outside looking in.  Especially when there are so many vicarious fan opportunities out there, waving at us, batting come hither eyes.  The Grizzlies.  Now there’s a sexy bandwagon.  Tony Allen’s twitter feed is full of fun crazy talk and Zach Randolph has “heel cred.”  The Thunder are so good, and yet so flawed, that rooting for them at this point doesn’t feel like a total front-runner pick.  You can’t go wrong with either of those if you’re aiming to shift some of your well-wishing to a team with better prospects.

And then there are the offerings of life itself.  Family, lovers, pets, gardens, vacations, professional fulfillment, the Fire and Ice books, brunch.  Now that there’s no guarantee that Rose or the Bulls will be supremely awesome soon or ever again, this feels like a moment to reinvest in those beautiful, tactile, and lovable elements in your life, some of which are capable of actually loving you back.

You could do that.  But it’d be a mistake.

Here’s why: because jumping ship now would make you a chump.

As noted above, casual appreciation of the Bulls is the name of the game in Chicago and throughout the Bulls diaspora, so it’s not as if anyone would confront you for your chumpishness on the street, at the office or family gatherings (unless it’s my family, in which case I will definitely tell you about yourself, cousin T).  In fact you’d probably have plenty of company: since Saturday afternoon, the ranks of Bulls  fans ready to look away from the wreckage, take up new hobbies like chess or paying bills on time, has probably swelled to epic proportions.  But that doesn’t make it right.  You know it isn’t right.  You know that while following professional sports teams — that is, corporate entities whose employees wouldn’t spit on you if you were on fire — has to rate as one of the least constructive ways a person can spend their time, the only thing that transforms it into an empty calorie pursuit is deciding to care only when your team’s chances of success are at their highest.  Bandwagoning, in other words.

After all, some of the most rabid fan-bases have been hardened by the worst disappointments.  The Blazers, the Knicks, the Jazz — if you’re reading this blog, you don’t need a history lesson.  It’s no coincidence that the hungriest fans aren’t only the most underfed, but the ones who’ve been close enough to smell the meal, only to have it snatched away and fed to someone else or thrown by fate into the garbage disposal, time and time and time again.

If you consider these fan bases to be mature for their run-ins with crushing disappointment, Bulls fans, as a collective, are in their adolescence.  The Pistons-dominated late-’80′s, which many of us weren’t old enough to experience, were washed away by the Dynasty years.  The same can be said for the heartache over Jordan’s broken foot, which caused him to miss nearly his entire second season; in his third year he came back even Jordan-er than before.  The post-dynasty Bulls (Eddy Curry, Tyson Chander, Eddie Robinson, Jalen Rose, Jamal Crawford and Mark Blount) were too awful to suffer over, and as scrappy as the Hinrich-Gordon teams were, few of us were under any illusion that they were missing a piece.

In other words, when we’ve had a taste of greatness, we’ve gorged ourselves on it.  And when we haven’t, we’d known not to expect one.  Our outlook was simple, innocent: we’ve had our ups and downs, but things have been exactly what they appeared to be.

This is what makes this moment unique for Bulls fans.  It’s the first time that we’ve had something truly excellent taken from us, maybe forever.  And it’s where my biggest fear for the Post ACL Bulls era lies: we’ve never shown that we’re capable of loving a team that is facing ruin. Even if Rose comes back fully healthy, there will always be the specter of another crushing injury.  His style of play dictates that reality.  We know that now.  And who’s to say what’ll happen with Noah and Deng’s also fragile healths, Boozer’s descent into mediocrity, and Taj and Omer’s upcoming contract negotiations in another year?  This will, in short, be a hard and downright scary team to love with all of its uncertainty.  To quote Melisandre, “the night is long and full of terrors.”

(And to add her implied meaning, get ready for some disturbing shit to happen while we’re chasing this throne, bitch.)

This entry was posted in General and tagged Chicago Bulls, Derrick Rose. Bookmark the permalink.