Stealing the Victory: Deciphering the Troll Job in Houston.

Posted on February 6, 2013 by Jacob Greenberg

In a night full of “beyond the boxscore” story lines — Pau’s injury, the Grizzlies’ collapse to the Suns (and corresponding “this plane is definitely crashing” body language on the bench), Samuel Dalembert’s LeBron-esque night — the biggest story came in the closing minutes of the Houston Rockets’ 140-109 drubbing of the the Golden State Warriors.  In the process, the Rockets had hit 23 threes, tying an NBA record.  With garbage time fully in effect, and both teams’ starters sitting on the bench, the end-of-the-bench guys for the Rockets started hoisting up threes, apparently having been informed of the record.  Mark Jackson, coach of the Warriors, chose not to put his team in the position of being on the wrong side of the record book, and began to intentionally (and in some cases, aggressively) foul.  To no one’s surprise, this angered the players, coaches and fans who wanted to see the record be broken; something Jackson and the Warriors seemed to give two shits about.  When the buzzer sounded — and after Patrick Beverley and Draymond Green had been ejected — Jackson and the Warriors exchanged some choice words with the Rockets (specifically, Rockets’ assistant J.B. Bickerstaff) and left, clearly ready to stick it to them next week in Oakland.

Understandably, speculation ran rampant about what caused Jackson to wage a bizarre war of trollish attrition at the end of the contest.  Most assumed it had something to do with preventing the Rockets from getting the three-point record.  Some thought it was specifically Patrick Beverley’s demeanor after a late game dunk, when he mean-mugged the Warriors bench.  Some thought it was specifically to stick it to Rockets fans, who chanted “ONE MORE THREE” even though it was probably well into “dribble out the clock and settle for junk shot” time in this particular episode of “Typical NBA Blowout”.  For his part, Mark Jackson was his typically cliched self when explaining his actions, saying that it was his job to “support his guys” and that they were a “proud group”.

He could’ve said whatever he wanted. To me, it was clear: Mark Jackson was stealing the victory. Now, “stealing the victory” is not my term.  It belongs to the Gods of Plastic, the bizarre ultimate frisbee team I played on at my summer camp-like undergraduate institution.  I’ve mentioned the Gods before; a counter-cultural, Hawaiian shirt-tressed group of psuedo-athletes and barely closeted nerds who worshipped a giant stuffed animal (named “Fruit Pooch”), and always played hard, smart, efficient frisbee (yes, such a thing exists).  As an institution and a team, I was always proud of three things about the Gods of Plastic: that we typically won our games, we usually were the most well-liked team amongst our peers, and that we always remembered that this was a game; something to approach with a positive spirit, and with mutual respect for our opponents and their supporters.

But we wouldn’t always win.  We weren’t always well-liked.  And we definitely weren’t always spirited.  Sometimes we’d get showed up by a better team, or we’d fall flat against a team we probably should’ve beaten.  And the losses themselves weren’t all uniform.  Some were fairly amicable, a set of proceedings that just needed to be wrapped up.  But some losses would get chippy.  The other team would hoot and holler after scored goals, shouting boisterous “FUCK YEAH!”‘s saved for only the most competitive of the second tier sports.  There’d be spiked discs and nerd-core stare downs; a bunch of fifth and sixth best athletes on their former high school teams suddenly joined with a unity of purpose, a mission to beat up the nerds in Hawaiian shirts.  And if there’s one thing about nerd-on-nerd crime, it’s that it’s the most unjust thing on the face of the Earth.  Verily, these injustices would not stand.

When that moment came, we’d steal the victory.  No captain or veteran leader would have to announce it; it’d be clear that the moment had arrived.  It’d take different forms, but the goal was the same: make the victory meaningless for the other team, and make sure they left the field thinking about anything besides the fact that they had just beaten us.  There was the time that we got blown out against the University of Wisconsin that we played rookies and smoked cigarettes on the sidelines while the veterans stayed warm in the car.  Or the time that we stole the other team’s cheer and supplanted their team name with a player on our own team, then sang it loudly each time we were around them.  We’d jeer, heckle, snipe and snicker.  Nothing was off limits.  And though the tactics varied depending on team and circumstance, the sole purpose was to “steal the victory”, to stick it to the bad guys in a way that didn’t directly involve the score board.

Now don’t get it twisted: there is nothing noble about stealing the victory.  It doesn’t take away the mistakes you made that led to you scoring fewer points than the other team, and doesn’t bestow second opportunities to stop the other team from scoring the points that beat you.  There is neither sportsmanship nor maturity involved in stealing the victory, and I can’t think of a single person involved who would look at our unapologetic trolling — essentially, poor behavior in the face of a loss — and say, “wow, those guys really are doing this the right way.  I really admire everything that they’re doing.”

That didn’t bother us.  No way, Jose.  Stealing the victory wasn’t about being the bigger person.  It didn’t improve our characters, or win us any potential job references for the future.  But did it build camaraderie?  Absolutely.  Did it enhance chemistry?  Without a doubt.  Yes, the other team may have hated us, totally blown away by our lack of sportsmanship, and flummoxed by our obvious disregard for the “unwritten rules” of the sport.  But hey, that’s how we rolled, and the game was over.  Glares would be exchanged, epithets would be muttered, and we’d all move on to our next game.  But all of us would know that, regardless of whether we won or lost, GoP wasn’t nothin’ to fuck with.  No way, guy.  No way.

Intentionally fouling Rockets players wasn’t the “mature” move at the end of the game.  Denying Rockets fans (and I guess the rest of us, as well) a chance to see an NBA record 24 threes could be construed as “selfish”, or “trollish.”  But when the final buzzer sounded, and Mark Jackson offered J.B. Bickerstaff and the Rockets bench one last final glare, Mark Jackson essentially stole the victory, shifting the focus of the discussion from the accomplishments of the Rockets to the shenanigans of the Warriors, while at the same time, showing his team (or as he’d call them, “his guys”) that he’s got their backs, and he’s not going to let them get any further embarrassed than they already were (and make no mistake, allowing 140 points is a major embarrassment for an improved, but currently slipping, defense).  Though the team entered the locker room losers, they had turned the experience into a team-building moment, and had new injustices (real or imagined) to motivate them going forward. 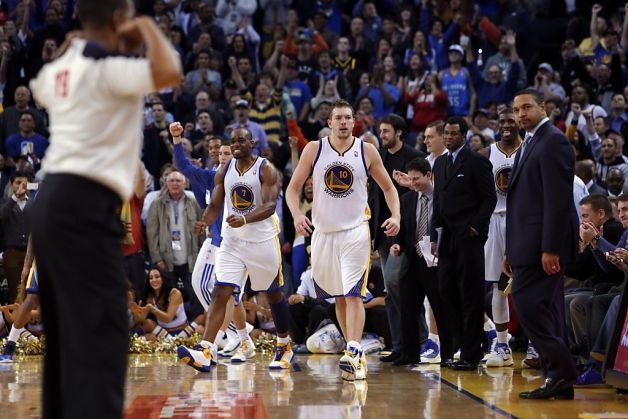 This Warriors team has relied heavily upon tough concepts to guide them through this crazy first season of playoff contention: chemistry and winning.  The Warriors emphatically declared that they would not be making any moves at the trade deadline because of the amazing chemistry they have in their locker room, and because of the harmonious relationship the team has formed with its fans.  The fans, in turn, have fallen in love with this hard-nosed, tough-minded Warriors squad, who clearly play for one another, and only one another.  They don’t play along with Rockets fans chanting “ONE MORE THREE!” and they don’t play along with Rockets players trying to lay and another crunchy layer of “punk’d” topping on the soundly defeated DubCake.

In any case, I’m pretty pumped to have tickets for next Tuesday’s game, where I’m sure the Rockets will be looking for their own ways to steal the victory.

Hand down, man down!! Big win for us. Wheels up to Miami.

C U Next Tuesday fellas!

2 comments on “Stealing the Victory: Deciphering the Troll Job in Houston.”