Ahh, NBA League Pass. It has been a wild ride this season. I cannot count the number of basketball games I have watched on you this year—somewhere north of 150, but exactly how north of that I didn’t track. Your service was worth practically any price, and especially the pittance I ended up paying. You made it possible for me to write about basketball without having a cable package. Sure I wasn’t able to watch many “marquee” matchups, but half the time that’s not what I wanted to watch anyways. I watched almost every single one of my favorite team’s games, and copious other interesting ones. Because of you I have an irrational love of Cory Joseph, Kim English and Gustavo Ayon. Thanks League Pass.

Now, there are numerous problems with your service. I wish I lived in a magic land where the FCC got involved and made your product much better. I’ll get to those problems in a minute, but first, Louis CK’s thesis—everything’s amazing and nobody’s happy—needs to be acknowledged. You have numerous problems, but from my couch I can watch ALMOST EVERY SINGLE NBA GAME! In two seconds I can go from watching Milwaukee playing Orlando to New York playing Utah to Portland playing San Antonio! If I miss a game, I can watch it the next day! I can have a responsible and informed opinion about the entire NBA because I’ve watched at least a few games of every single team! That’s awesome!

In a few days the playoffs will start, and you’ll be nerfed. With all playoff games on national TV, no more will you be useful. I’ll have to suck it up and pay for cable, go watch games at bars or friends’ houses, stream broadcasts or just not watch. None of those are particularly palatable options. I’ll miss you League Pass.

That being said, things could be a lot better. Deadspin wrote a piece at the beginning of the season outlining numerous problems with the service, and they’re spot on. Compared to our options in 2003, League Pass is a 14 out of 10. Compared to what our options should be in 2013, League Pass is a 4 out of 10. If it didn’t have an exclusive content license with the NBA, surely numerous competitors would have come along and built a better service. In the hopes that the people in charge of League Pass love this blog, here are the eight biggest problems that need fixing. Have more problems? Let me know in the comments.

1. Customer service (or lack thereof).
It is impossible for somebody with League Pass to help you if you have problems with your service. That’s not hyperbole: it is actually impossible. The contact information is extremely difficult to find. Once you do find it, nobody responds to your requests. If somebody does respond to your request, it is with boiler plate language that doesn’t solve anything. Then they ignore you.

2. You have no idea what you’re buying.
Did you buy League Pass Broadband, and then try to watch something on your mobile device, only to find out that you couldn’t? That’s because you have to buy a separate League Pass mobile subscription. Why would these be separate things in 2013?

3. The service breaks. ALL THE TIME!
I can’t get the League Pass application to work for me on Google Chrome, and often random games just won’t play. If you survey nine other League Pass subscribers, you will hear about nine unique problems with the service. This gets back at problem number one: there is nobody to talk to.

4. You can’t watch nationally televised games. Ever.
I understand the concept behind blackouts. I think they’re kind of stupid and a throwback to a pre-internet, pre-digital age, but I accept them. If a game is on TNT, ESPN, ABC, NBA TV (or is a local broadcast), I can’t watch it. That’s annoying, but oh well, that’s life. The real problem is that you can’t watch that game, ever. Similar services for other sports (like MLB.TV) archive a game as soon as it ends. Other services archive it after 48 hours. NBA League Pass never archives it. If it was on national TV, you can never see that game.

5. You can’t watch games from a past season.
Similarly, want to replay that game from last season, when you subscribed to the service? Nope, you’re screwed out of luck.

6. There is no choice of feeds.
Some, many even most, NBA broadcasts are bad. Whether it is the awful bumper music, tight camera angles some producers regularly use, or most likely, those grating announcers you just can’t stands, there are some broadcasts you would just like to avoid. If you were using the subscription service for any other sport, you could choose between watching the home or away feed. Not when watching basketball. Watching the NBA League Pass chosen feed is a game of Russian Roulette, and I always land on Sean Elliot.

8. Extras
I just want to watch basketball. Taking care of any of the above issues would be great. But while you’re at it, why not throw some bells and whistles onto the service? Why not mimic MLB.TV’s in-park audio feature, where the announcers are muted, replicating the experiene of sitting in the actual park? That’d be great. What about starting feeds earlier, and letting us watch player introductions and the National Anthem? 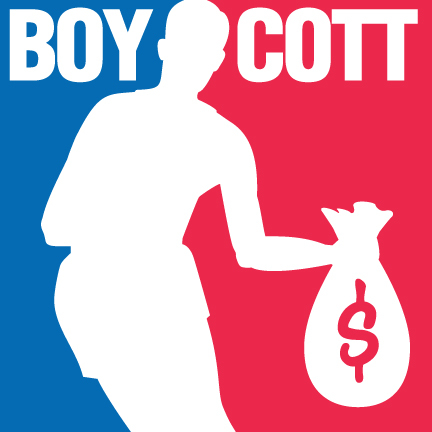 I can’t threaten to boycott League Pass, because it just isn’t credible. Whatever crappy product is put out, at whatever crappy price, I’ll pay. As long as I live 3,000 miles away from my favorite team, as long as I write about basketball, the NBA has me by the balls. But hopefully I can convince somebody who otherwise would’ve purchased the service that they shouldn’t, or convince somebody not to renew. As long as the product isn’t good enough, I will continue to tell people not to buy it, and hope you do too.