Your Annotated Smartphone Bathroom Reader for Sunday, May 19th, 2013. 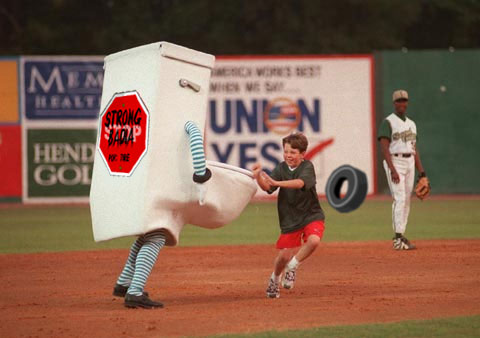 Post Warriors elimination, I’m watching more baseball than anything else.

The Diss’ co-editor does his thing over at Hoopspeak, where the topic of conversation is Jarrett Jack, the Warriors backup…well, not quite point guard, but not quite useless chucker.  Draper does a deep exploration into the statistical conundrum that is Jarrett Jack, the Warriors hired gun who won equal amounts of praise and criticism this season for his occasionally inefficient play.  Draper points out that Jarrett Jack almost existed outside the rules for a team that used the three point shot and ball movement to succeed.  Instead, the Warriors lived (and occasionally died) on Jarrett Jack God mode, especially after Curry was hobbled.  It’s a smart analysis.  I’m in the Jarrett Jack camp, though.

Y’all can’t touch me at NBA 2K.  No really, you can’t.  I am incredibly good at that game.  However, other less realistic basketball games, like NBA Jam or NBA Street?  I suck at those.  As Drew Toal argues, that’s really a sign of how far I’ve fallen.  Toal provides a comprehensive list of games that put fun and originality above realism, including NBA Jam, Mutant League Football and my personal favorite Arch Rivals.  All great games, but I still prefer 2K over all else.  Thanks to friend and (occasional) Diss reader Connor Cole for directing me to this piece.

The Kawhi Leonard Conundrum, and Why Life is Unfair
Andrew Sharp
Grantland

In this piece, Andrew Sharp brilliantly describes one of my least favorite parts of being a fan of (until recently) a bad team: watching a player you had a chance to draft succeed on a different team while the player you drafted struggles on your own team.  In this case, Sharp is examining Kawhi Leonard, who had a chance to play for Sharp’s favorite team, the Washington Wizards (they drafted Jan Vesely instead).  As Sharp watches Leonard turn into a star in San Antonio, Sharp wonders, essentially, why good players end up with good teams, while ho-hum players end up with ho-hum teams.  He asserts (correctly) that it is no accident that these arrangements occur, since teams that know how to win also know how to develop players.  For this reason, players like Chris Singleton remain useless on the Wizards, while guys like Jimmy Butler, Kawhi Leonard and Paul George look like stars-elect.  Indeed, good management matters.

Being Big, or Being Wilt Chamberlain
David Roth
The Classical

It is a common refrain now: centers are dead in the NBA.  I don’t think it’s true, though, for many of the reasons David Roth discusses here in this short piece for The Classical.  Big men in the NBA seem “self-conscious”; unsure of both their skills and their giant bodies.  Roth uses an animated interview of Wilt Chamberlain to highlight the role size and society play in the creation of 7-foot humans as both basketball players and human beings.  Roth correctly points out that while Wilt was a transcendent talent a mega-celebrity, a childhood of being huge left him sometimes feeling likelike a freak on a bus, who didn’t know what to do with himself”.  I often forget how large NBA players are even without their athletic skills.  Players like Andris deserve some love regardless of how they perform on the court.

It’s a good thing I follow Bill Sharman on Twitter, because he pointed out this useful little summary on the brief life of the American Basketball League (ABL), an eight-team league that lasted for two years in the early 1960s.   The ABL formed essentially as a professional league for founder Abe Saperstein’s Harlem Globetrotters to play against, but had a lasting impression on the game.  The ABL featured Connie Hawkins (before he was a Globetrotter, and later an NBA/ABA stalwart), as well as Dick Barnett.  It also boasted the first ever African American head coach (John McLendon) in professional basketball, as well as the three-point shot, which was later adopted by the ABA, and subsequently, the NBA.  Sharman plays an important role in the history of the ABL as the only star-level NBA personality to affiliate himself with the league(as head coach of the ABL’s Los Angeles franchise).  This is a very interesting and informative read on the short history of a significant basketball league in the United States.