The Drew Carey Show once joked: “Oh, you hate your job? Why didn’t you say so? There’s a support group for that. It’s called EVERYBODY, and they meet at the bar.” Beat reporters, however, aren’t allowed to participate in bitching about their job. They’re seen as being paid to watch sports, living out the dream. At least, that’s what fans think the job is.

In reality writing about sports isn’t very different than any other job. Many of the beat reporters love it, while others simply see it as a way to put food on the table. Some reporters have good bosses, others don’t. Sports reporters: they’re just like us! Still, knowing that readers understand it as a glamorous luxury—and not the drudgery of being on the road for eight months, writing about the same people who hold you in contempt day after day and not making enough money to put your kids through college—you don’t hear reporters complain about the job very often.

Writing about sports for a living = an endless torrent of jealous rage from people who probably make more $ than you.

Enter Jason Quick, the longtime Blazers beat reporter for The Oregonian. Way, way too longtime, if his interview with Ben Golliver at Blazersedge is any indicator: “I think it had become stale to me a little bit in a way. I think I just lost faith in a lot of the NBA. I’ve seen a lot of bullshit.

At 13 years covering the same team for the same paper, Quick was one of the longest serving beat reporters in the NBA. There’s a reason most beat reporters don’t last 13 years. The game after game, year after year sameyness of it all takes a toll. It’s not unlike the college freshman who is so excited to eat dining hall food—mom and dad aren’t around to stop me from drinking soda with every meal!—only to mouth vomit at the thought of eating there by senior year.

All of this to say that the job isn’t nearly as cool as it seems, and Jason Quick has some very legitimate gripes. It’s acceptable to be burned out and want a new challenge, to be disappointed to be given your dream job only for circumstances to change. It’s okay that the peak behind the NBA curtain took away the magic and left Quick disillusioned.

But Quick also has a host of illegitimate gripes, never mind the mind-boggling decision to publicly air his—along with a host of others’—dirty laundry in the first place.

Very quickly, most beat reporters understand that the NBA is a different beast than the thing they grew up watching on NBC. They stop rooting for any particularly team and see everything through the lens of reporter, not fan. Seemingly though, not Jason Quick.

He talks about his disillusionment with “putting your heart and soul into a player and believing him when he talks about kissing his kids at night” only to see him on the next road trip “with somebody that’s not his wife, basically getting it on”. It’s a stunningly naïve admission—I thought everybody understood a long time ago what happens on the road with professional athletes. It’s also a misunderstanding of his role.

Jason Quick is not TMZ, nor is he the morals police. His job is to report on the results of basketball games and everything that goes into that, not what happens seven hours later inside of hotel rooms. It’s not his job to impose his beliefs about relationships onto the players he covers, especially without having real knowledge about what said athlete and his wife consider appropriate in their relationship. And what is he doing putting his “heart and soul” into a player that he has to professionally comment on?

Perhaps even more puzzling is his decision to call out Nicolas Batum and his agent. Given that the question that prompted his rant—“Any other reflections on why now is the time to move on”—was a vague, general wrap-up question, it seems like Quick was eager to share the anecdote about he got screwed. But really, Quick screwed himself. Quick had an on-the-record conversation with Batum before being asked post hoc not to publish it. He had the option of running it, but believed Batum’s “Have I ever done wrong by you?” and chose not to. When Batum then told the same information to David Aldridge, Quick felt betrayed. But really, what happened between Batum and Quick is part and parcel of dealing in sources, quotations and breaking news. There’s no doubt it sucks, but there’s also no doubt that Quick had a choice and he miscalculated.

It’s also very poor form to tell this story now, when there is nothing to be done about it. It reminds me of ex-Presidents advocating for the legalization of marijuana…years after leaving office and any chance at actually affecting policy change behind. Quick should’ve either ran with his on-the-record information, called out Batum and his agent while he was still on the beat, or shut up about it. Doing it now only serves to make him look petty.

Finally, what is Quick doing telling these stories, and why is The Oregonian letting him? The thought that this interview wasn’t sanctioned by the paper—the newspapermen on the sportsjournalists.com board originally agreed that the interview read like Quick was intentionally trying to get fired—was proven false when he wrote a column in The Oregonian and gave a radio interview about the same subject.

One of Quick’s notable contributions to the Blazers beat was his ‘Behind the Locker Room Door’ series. As its name suggests, Quick went beyond the traditional beat reporter role to tell stories of what was happening in the locker room, giving fans a closer look at how the players interacted with each other, coaches and reporters. It was popular and well-executed, a great example of a reporter really serving his readers.

Perhaps this experience made Quick feel like it was important to share his gripes and disillusionment with his readers, but there’s also such a thing as over sharing. Dirty laundry is something that is probably better left behind the locker room door. 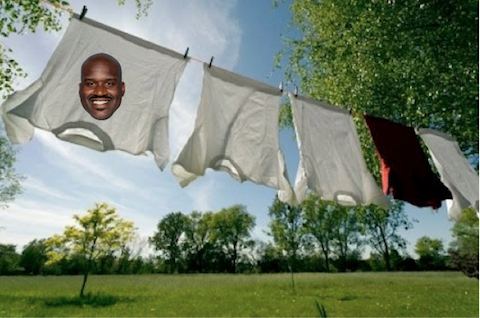