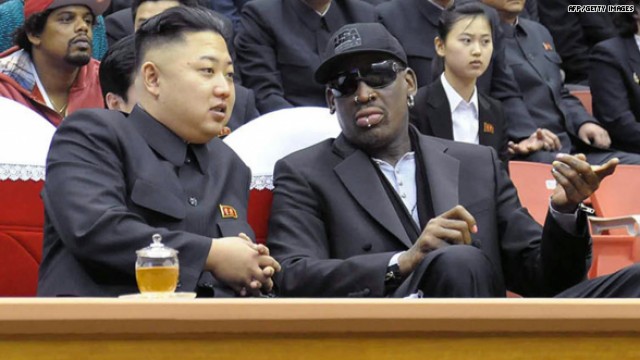 Sports reporters are often out of their depth when “real world” issues intrude upon the their bubbles. They’re good at writing inspirational tales about players, firing off 1,000 word gamers on deadline and compiling lists of the best coaching candidates on the market. But when things like stadium workers striking, domestic abuse, PED use and other like issues are discussed, much of the coverage is cringe-worthy. And so it was with trepidation that I read that Dennis Rodman had made another trip to North Korea last week.

The United State’s—and the world’s—relationship with North Korea is quite complicated, fraught with concerns of nuclear weapons and mass starvation, as well as the fact that the Korean War has never actually ended. It’s a geo-political chess game that involves the entirety of East Asia and probably takes an advanced degree to understand fully. I expected to see a lot of really, really dumb pieces by sports journalists playing foreign affairs columnist.

After heavily covering his first trip to North Korea in March however, the sports media world has remained almost entirely silent on this one. ESPN has merely posted three AP stories, while Sports Illustrated could barely string together 200 words for either of its reports. The approach was no different at CBS or Fox, and while NBC at least ran three pieces on the subject, none of them went much beyond a short summary and a dose of snark.

Predictably, the articles that do actually discuss the visit in-depth are full of party-line moralizing. CNN’s Josh Levs utilizes a cute rhetorical device, contrasting “The World According to Dennis Rodman” with, presumably, the reality of a country he has never visited. USA Today’s Calum MacLeod (and the Natalie Diblasio hosting embedded video) breathlessly detail the fate of fate of Kenneth Bae, a US citizen imprisoned in the country, as if North Korea is the only country with political prisoners.

The galling thing about this lack of attention and uncreative reporting is that what Dennis Rodman is proposing—diplomacy and easing tensions through the common ground of sport—is pretty universally agreed upon as a good thing. According to the International Olympic Committee the goal of Olympism is, “To place sport at the service of the harmonious development of humankind, with a view to promoting a peaceful society concerned with the preservation of human dignity.” Sports are used to ease religious tensions in conflict areas like Northern Ireland, Israel, and the United Nations promotes its Sport for Development and Peace program.

Kim Jong-un is a megalomaniac dictator that enacts policies that benefit a small cabal of cronies to the detriment of vast swaths of the population he rules over. We get it. Does Dennis Rodman visiting with him actually cause harm to others, though? Are there Westerners who thought, “You know I thought this Kim Jong-un guy was a bad apple, but now that historically levelheaded and reasonable Dennis Rodman says he’s a great guy, I will support his policies”? Are there North Koreans (who have never had access to the TV on which to see Dennis Rodman) who thought, “You know, I can barely put enough food on the table for my family, but now that the one who presides over my misery is friends with that guy with the funny colored hair, I guess he’s not too bad”? Close associations with a dictator is a terrible look to wear, but I remain unconvinced that what Dennis Rodman is doing actually harms anybody.

Instead, I see the roundly-mocked Dennis Rodman proposing a well-honed strategy of engagement that might actually have the smallest of chances of opening up North Korea to the rest of the world, and reducing its isolationism from the rest of the world community. Despite the journey of how Rodman got there, isn’t this something that should be lauded?