Posted on September 5, 2014 by Jacob Greenberg America’s sultry love affair with Anthony Randolph roughly coincided with its equally passionate love affair with Dubstep, both arriving front-and-center in 2009, as the horrors of the Bush years finally began to fade, and the new horrors of the Obama years began to make themselves known. In many ways, it was a fitting soundtrack for Randolph, as the two seemed to be kindred spirits; it’s discordant clanks and skittish screeches balanced by steady percussion and melodic overtures, as Randolph’s career proceeded along at roughly the same cadence. It would be during the bass drops — deep dives into the darkest depths of a song, where your ears open up and your body runneths over with the sheer power of noise — that you’d lose yourself in the dream. For Randolph, those drops would come in the form of brawny athleticism few had seen the likes of; dunks and alley-oops that would put the game on ice for a few minutes, and blocks that sent orange orbs screeching into the stands, at least temporarily diverted from their intended destinations. In both mediums, there was something new and different, a unique way at looking at a well-worn trope, and the distinct possibility for something original to last; to change the game in a permanently positive way.

However, most of us know that originality is as fickle as it is farcical — everything is an imitation of something or someone that preceded it — and in a vicious recalculation of the time-honored equation, Randolph’s basketball life imitated the tempestuous nature of art. The dunks, blocks and rebounds that seemed to distinguish him from his other positional peers (though it was always difficult to tell which position Randolph was playing, and which position he was meant to play in the NBA) slowly faded into the background as other more pressing professional tasks went unfinished, and necessary development went unmet. The alley oops were great, but the simple defensive rotations were absent. The blocks were cool, but there seemed to be a legitimate barrier between him and a fundamental understanding of where he was meant to be on the court. And his frustrating lack of health, an inability to stay on the court, stymied good will, despite forceful attempts to look past the inconsistency. Yes, it is a low blow to blame someone for repeatedly spraining their own ankles. Yes, it is a despicable to be a punching-bag for a burnt-out, alcoholic coach during your rookie year. But there is little room for a long view in the NBA, for participants and consumers alike. Before long, all that was predictable had occurred, and most had moved on. We can almost see it now, in our overactive mind’s eye: a faux dubstep beat, developed by an ad agency in an effort to sell yogurt in a tube to a hipper, younger generation, churns along like dramatic yawns after lunch, while we sit, blink, and watch Randolph sit, blink, and rot slowly on the vine. This is the death of art. This is the end of Anthony Randolph, at least as we know him, and loved him. 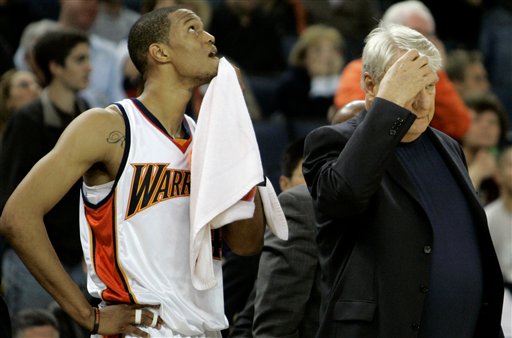 The players we refer to as “busts” — a blanket term referring to those who failed to live up to the lofty expectations others set up for them, or who fail to evolve into the players experts were sure would emerge after a few years of transformation -often times serve as time capsules for eras that have closed the doors on themselves, or crushed themselves under the weight of our own staggering prognostications. A disco ball shines brightly on the afro’d head of LaRue Martin, a steady rhythm guitar providing a soundtrack to a player and genre in continual decline, until both are absent from the picture. Strangely suspended Orbitz drinks and monotonous alt-rock stand proudly by the mid-1990′s dream of The Kandiman, the unknown seven-foot prospect from the University of Pacific who indeed was too good — or, too bad — to be true. The antiquated sounds of Jermaine Dupri and Chingy sound like dulcet tones while we watch turn-of-the-century clips of Tracy McGrady making the league look stupid with seamless, almost liquid movements to the hoop, yet sound like gramophone music once McGrady’s career finally took its final, bleak shape. In those moments, these players become something different; a representation of the things that used to make us smile, until we realized that they — or, “it” -were never going to be enough, and that a rearticulation of what could’ve been pales in comparison to what actually came about.

It is possible that Randolph, who has taken his sad eyes, disappointing career averages with four different teams, and yet-unformed skillset to Lokomotiv Kuban, will re-emerge, and make himself noticeable again. He would not be the first person, place or thing to come back from the Great Beyond refreshed, renewed and rejuvenated. Gerald Green’s original form — a failed lottery pick, high-flier with no skills, a bona fide “bust” — was not sufficient for consistent NBA production. His transformation into a serviceable two-way player, who could slash to the hoop as well as drain corner threes, happened long after he was deemed a bust, and banished overseas. For Green, the transmogrification was absolute; tangible even from our privileged positions on the couch. No longer focused on proving who he wasn’t, but rather, who he was, Green was finally released; finally ready for originality. For Randolph, the goal seems to be to figure out who, exactly, he is, at least on a basketball court. One gets the suspicion that once he discovers that innate thread within himself, everything will be fine, and he’ll get going with what he was supposed to be doing from the very start. It might not look like what we expected — those dunks, those blocks, those rebounds; they still delight the mind — but it will be his very own, and ours to fully, totally and unabashedly enjoy.

The chance remains that Anthony Randolph has played his final game in an NBA uniform. It’s possible we’ve called him a bust to his face for the last time, a tired epithet that is as vague as it is vicious. But if that’s the case, it means that he finally made it work for himself; finally found a place he was comfortable, and able to contribute. If that occurs, we will have only one recourse: to congratulate the man, watch what he has become, and postulate if, or how, he could reintroduce himself into our hearts and minds, reformed and revamped into a completely different specimen altogher. Then, and only then, can we return to YouTube clips from 2009, to watch those brilliant dunks, blocks and rebounds which had us so excited about the future, as an industrial dubstep beat plods along happily in the background.