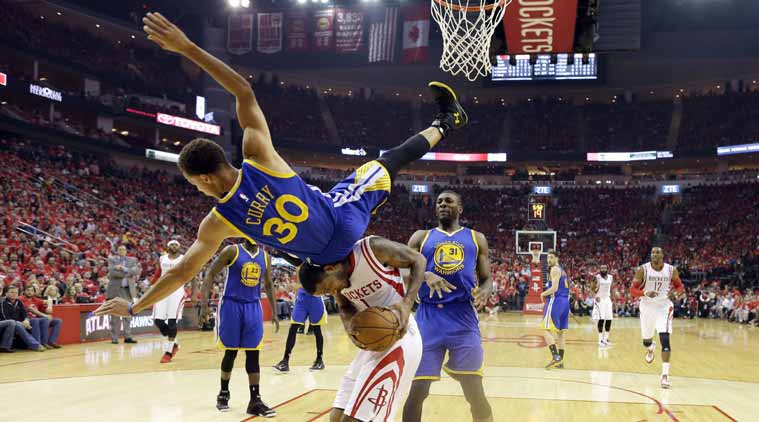 I used to cover my eyes each time Stephen Curry hit the floor. As his slight frame went crashing to the hardwood, I’d suck my breath in sharply and promptly squeeze my eyelids shut. I would use Jim Barnett, the team’s color commentator, as my cue as to whether I could open my eyes and get back to it. If Jim’s voice remained calm and level, I would slowly open my eyes, just in time to see Steph bouncing up, no worse for wear, his mouth-guard mashed between determined teeth, ready to rejoin the fray. But if Jim didn’t play along — a tortured moan emerging from his body, his voice high with panic as he would exclaim that “this doesn’t look good at all!” - I would immediately slip and fall into a deep chasm of fan despair.  As Steph would hobble up, favoring an appendage, wincing and grimacing as he’d limp down the court, I would throw my hands into the air and squeal pathetically to an empty room. My panic would deepen as Steph would head to the bench, and trainers would surround whatever piece of his body he had damaged. Sometimes the trainers would walk away, and Steph would eventually return to the court. But sometimes, he would slowly rise and head to the locker room, and I would join the chorus of other Warriors fans, wherever they may have been at that point in 2013 or 2014, thumping the sides of their heads with frustrated, balled-up fists and  using their strained voices to wail a shrill lament.

I easily remembered the steps of that dance this past weekend, at the 2:10 mark of the second quarter in the Warriors blowout victory against Houston Rockets. Though the event itself was unique, the features were horrifyingly similar; dark reminders of a not-too-distant past. Steph’s landing after his missed layup was somewhat awkward; nothing about it particularly caught my eye. But then his gait shifted; I noted him shaking his leg in an attempt to correct something that had become misaligned. I could feel my face getting hot as the situation degenerated by the second, and Steph’s condition began to worsen in the world’s full view. Before long, Steph was dragging his leg, struggling to keep up with the disjointed Rockets as they hurled the ball at their basket. My fists were already pounding the table by the time he reached the bench, pulled off his increasingly iconic Underarmour shoes, and presented his ankle for the team’s trainer to look at. As he rose slowly to head to the locker room, I had stopped caring whether he would return to try and play through his troubling injury. In fact, he did briefly try and return during the third quarter, but a combination of a sufficient Warriors lead, a discombobulated opponent, and a clear limp lead to him staying on the bench, close to the watchful eye of Steve Kerr. I had long stopped caring about win number one. I had joined everyone else on their own respective islands of despondence; the blue splendor of a historic season suddenly shrouded in leaden skies. We know fairly little about what happened with 2:10 to go in the second quarter of game one. Part of this is part to the Warriors’ peculiar penchant for highlighting-and-deleting the diagnoses they release to the media, a practice they have mastered since Andrew Bogut revealed his own secret microfracture surgery to reporters in 2012. Steph’s injury has been variously called a roll, a slip, and, most sinisterly, a tweak. I am unsure if “tweak” is the medical term — Webster’s defines “tweak” as “twisting or turning something sharply” — and regardless, it provides little comfort for anyone who is searching for an answer about what to expect from here on out. Watching Curry suffer a non-contact ankle injury is enough for even the most arrogant fan to self-consciously put the champagne away and save the vacation day they had set aside for the championship parade. Even the newest, most inexperienced Warriors fan knows that Steph is the celestial body the rest of the team orbits around, and that without him, the Warriors are deeply compromised. Most fans of any given team can point to a season where  injuries seriously altered the outcomes they had hoped would occur. Fickle ligaments and brittle bones can be found on both good teams and bad, and the snap or pop that alters the course of history can come at any time. Any Bulls fan frowns darkly as they remember Derrick Rose rolling around the floor of the United Center, a potential championship team fully disarmed as their most important weapon wrapped his body protectively around his ruined knee. More recently, Cavs fans can point to the images of Kevin Love sprinting towards the locker room, cradling his shoulder, his arm dangling askance from the socket, or Kyrie Irving, slamming his jersey to the floor as he limped off the court to start the long process of recovering from a broken knee. Even Warriors fans who, shall we say, waited out the bad weather from 1995 to 2013 to belatedly bask in the sunshine, can point to the 2013 team, which fell short against the San Antonio Spurs while simultaneously managing injuries to Curry, Andrew Bogut and David Lee. They could even point to the 2014 team, who fell in seven dramatic games to the Los Angeles Clippers while trying to cover-up Andrew Bogut’s massive absence in the pivot with Hilton Armstrong, a tall man who wore the number 57. In this regard, nothing about what happened to Steph is unique: this is an injury that he has suffered before, in a league that, collectively, suffers many injuries of a similar nature. Certainly it will not end his career. But in tournament where — yes, gird yourself, Warriors fans — luck plays a meaningful role in the outcome, this is not an event to be taken lightly. In many ways, everything has been tweaked; wrenched sharply in an unnatural direction.

Others are far more skilled at predictive prognostication, and as such, I’m the wrong person to ask about what might happen in this series. Obviously a great deal rests on whether Curry can perform at a level at-or-above an MVP level; if he is to return in this series at all. And while the Rockets certainly remain a threat to exploit a wounded Warriors team, the Warriors have beaten the Rockets without Curry; a scrappy, aggressive game that represents one of the most satisfying wins of the Kerr era. The Curry-less Warriors are long, lanky and positionless; Draymond Green, Klay Thompson, Andre Iguodala and Shawn Livingston lead a a different sort of assault. They clog passing lanes and endlessly switch on defense, they steadfastly work towards creating their own unique but effective shots on offense. They are a formidable outfit, without doubt. But they are vulnerable without Curry. Without the individual that accentuates everything at which they excel, there is little more to do but watch with clenched fists, and hope that nothing else need be tweaked from here on out.