Blind Spots: 3 Players Who Should Get More Burn

Before the NBA season begins, coaches have it all planned out. They know who their starters, at which positions they have depth and which they don’t, and how they are going to manage their rotations. But then the season starts.

Players dip in and out of form, in and out of health. Change is necessary. But some coaches, for a variety of reasons, stick with their starters even after it is long clear that they should be shoved to the bench. Here are 3 guys that should be either starting or way higher on the depth chart. What if I told you that Hasheem “Why the HELL did the Grizzlies pick him 2nd overall” Thabeet was the second best player on the Oklahoma City Thunder? Would you believe me? Cause you should. Cause he is.

Okay, maybe not, but Thabeet is second on the team in both WS/48 and WP/48 (two statistics that attempt to capture the value of a player in a single number), in a significant number of minutes. What is clear is that he is much better than Kendrick Perkins.

And really, it’s not even that close. The per 36 minute numbers above show that, with the exception of assists, fouls and turnovers, Thabeet has been superior to Perkins, yet has received less than half his minutes. It is commonly known that the Thunder’s starting lineup of Westbrook, Seflosha, Durant, Ibaka and Perkins is one of their worst, but that is usually attributed to Seflosha’s lack of offense, or Durant and Westbrook’s inability to coexist. I’d argue that Kendrick Perkins’ presence in the starting lineup is as big, if not bigger, of a reason for the poor lineup. 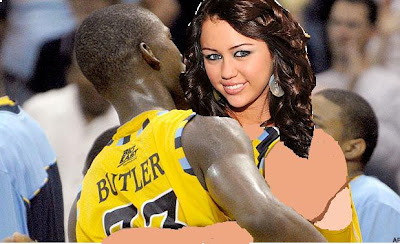 Luol Deng, who Jimmy Butler backs up, is not having a bad year by any means, just a meh year. Most of his stats are slightly below his career averages: effective field goal percentage and rebounds slightly up, everything else slightly down. He’s the same player he has been every year: maybe a top 10 small forward, but just barely.

And then there is the whole minutes thing. Tom Thibodeau is like a bike with a bum wheel: he’s got no rotation. He runs his starters into the ground, and then tosses a couple minutes at their backups. Deng is playing the most minutes in the league. As the linked article notes, Chicago’s “Bench Mob” is gone and Thibodeau doesn’t trust the new bench. For all Thibodeau’s defensive wizardry, his ability to recognize talent is suspect, as both Taj Gibson and Jimmy Butler could start for most teams in the NBA. But this is about Butler.

Jimmy Butler does one thing, and one thing very well: he puts the spherical object through the round one. His true shooting percentage is tops in the Bulls because he is okay at shooting, but he is elite at getting to the line, where he hits 90% of the free throws. Given that the Bulls have the 20th best offense in the league, and 26th best effective field goal percentage, they can use all the Butler they can get. I’d call Wright a power forward, ESPN has him as a center, but either way, with Dirk out Wright is the Mavericks best big man and needs to be playing a lot more. The funny thing is, Wright has been an average or above average player practically his entire career, including last year when he absolutely killed it…for the Dallas Mavericks! Between this and the Mavericks recent signing and apparent intention to start Derek Fisher, the shiny Mavericks analytics team has certainly lost some of their luster.

Now, at first glance, the above numbers would seem to suggest that Elton Brand has in fact been the Mavericks best big man. If these three were point guards that might be the case, but they’re not, they’re power forward/centers. Their main jobs are to score, rebound, and defend. Anything else is just gravy.

At scoring, Brandan Wright has been, and continues to be, elite. He only takes really good shots, makes a lot of them, and shoots his free throws well. In contrast, Elton Brand has been downright awful at shooting this year. Brand is the 335th best shooter in the entire league, and big men almost always have higher field goal percentages than guard! His shooting has been so bad that it absolutely destroys any other value that he may offer.

Brand is better than Wright at rebounding, while they are both much better than Kaman. Wright is actually a better defensive rebounder than Brand, while Brand cleans up on the offensive glass, which very well could be a result of how godawful terrible Brand has been shooting the ball.

On defense all three have been pretty close. Brand has a 103 D Rating (lower is better), Wright a 105, and Kaman a 106. By O Rating, however, Wright has a 123 (higher is better), Kaman a 102 and Brand an abysmal 97. The Mavericks overall D Rating is 106.5, and O Rating is 104.1. Wright has therefore slightly helped the D, while being a massive boon to the offense. Kaman has been a bit below average on both, and while Elton has played the best big man defense, his aforementioned terrible shooting makes him a complete offensive liability.

Kevin “Franklin Mieuli” Draper was born and raised in Oakland, California, and loves it more than you can possibly imagine. Follow him on Twitter @kevinmdraper
View all posts by Kevin Draper →
This entry was posted in General and tagged Brandan Wright, Chris Kaman, Elton Brand, Hasheem Thabeet, Jimmy Butler, Kendrick Perkins, Luol Deng. Bookmark the permalink.

3 Responses to Blind Spots: 3 Players Who Should Get More Burn