You, Too, Are Uprooted. LeBron James, in the abstract, and from a distance, can be rationalized and understood. At the most basic level, he exists as the active representative of an oft-discussed lineage, a time-honored tradition most fans of sport have been exposed to since they became aware of the institution itself. He is one of the great ones; one of the truly original talents of the game. The ability to name his most relevant modern predecessors — Jordan, Shaq, Kobe, Magic, Bird - has become one of the most basic tests for casual fandom in the 21st century, and in time, LeBron’s name will easily sit beside them. Even from afar, and without direct experience, the platitudes don’t lose any luster; don’t dim in the slightest. Observers can offer hyperbolic takes in flat, tired voices; resignation and reverence braided together in a bizarre knot. “He’s the greatest player of his generation,” is joined seamlessly by “the closest thing to Michael Jordan”, and very few (outside of a frayed Laker nation-state) could argue otherwise. LeBron is accepted as fact; fiat draped wholly in legitimacy. Recent history has mandated that the championship goes through him, and all interested parties — players, teams, polities and fanbases — have fallen in line. Some are able to counter him. Others are not. As a writer of the NBA, it’s a simple enough process to recite by memory. And before this year, it was just as nice to sit, watch, and appreciate.

But LeBron up close — deep in your psyche, dictating your emotions — is a different matter altogether. For LeBron isn’t just battling the opposition on the court, a group of men equal in physical stature, but far inferior in terms of collective gravitas. LeBron is also in your living room, crashing through the coffee table, trampling all over your furniture. He is in your face; his eyes wide, his nostrils flared, a wet mouthpiece barely perceptible over brilliant white teeth. As LeBron backs down a defender, easily clearing space, and in the process, creating endless options within that newly occupied space to complete his task, you, too, are uprooted; you, too, are displaced. When he shifts inevitably into kill mode — his body contorting and buckling, storming through the ramparts and taking the contact, or stopping without warning, and raising up far above the reaches of your outstretched arm, your fingers splayed — you are left with little choice but to absorb the contact and see whether your best effort from the living room was enough to stop him. Typically, neither your effort, nor the effort of the player(s) attempting to stop him were enough. All too often, the ball goes in. He lives. You die. Certainly: it has been incredible to watch the Golden State Warriors compete in a series that I always thought would elude them. It has produced highs that have superseded We Believe many times over, established an emotional connection with a professional sports team that I never conceived could be possible. But at the same time, it has been equal parts terrifying to bear witness to a version of LeBron that, as Tom Haberstroh writes, is “unfathomable” , a horrible, beautiful amalgamation of the greatest players ever to compete in the NBA. LeBron over the last five games has been the secret weapon developed through years of bloody conflict in FreeDarko’s positional revolution; an undefinable maelstrom that has been engineered to individually defeat every player that attempts to stop him, regardless of their size, shape or conviction. The Finals, being watched by record numbers of people with each passing game, has been fully dictated by LeBron, even if the Warriors are up a single game in the series. It has been a performance that has impacted casual fans in distant markets, and terrified the denizens here in the epicenter. His onslaught captured me as a victim; once in the safety of my home, and last Sunday at Game 2. By 9 pm — a bucket list day complete, overtime and everything — I stood dumbfounded at Oracle, tucked far away in the people’s seats, uncomfortably packed with 20,000 other stunned faces sweating in cheap (but sacred) yellow shirts. I felt that LeBron had defeated me, had somehow made my own emotional defeat part of his legacy. More than a week later, the feeling that it is not the Cavaliers that must be defeated, but LeBron, himself, has not waned in the slightest.

The final is never supposed to be fun. This is a concept that carries weight in both learning and leisure; appears to be applicable in countless contexts. The final examination of a class is a stressful, dehumanizing affair; all-nighters before, furious scribbling and muttered fuck‘s during, and a sense of relieved exhaustion after. The final boss of a video game is never as fun as the game itself; random button-mashing, countless deaths, and several rage-quits when it just isn’t enjoyable anymore. At this point, I cannot say that taking the LeBron final — or, rather, watching my preferred team take the test — is a pursuit of happiness. The gnawing anxiety of the unknown, the awesome power of the inexplicable; this is the LeBron that Warriors fans have come to know intimately over the past few weeks. Perhaps more intensely and aggressively than ever, LeBron has insisted to be noticed; demanded to be respected. Fan allegiance aside, we have witnessed firsthand the incredible skillset of LeBron James; on the television, in the Arena, on shoe shelves and coming to a theater near you. It is not fun to deal with LeBron, whose arsenal is deeper than we could have ever suspected, more developed than our intelligence had let on. There is even — deep down, in a place I visited with Warriors teams in the past — a feeling of just wanting it to be over, so I can get on with life, and stop screaming at the television. It’s summer, after all; this is very late in the year to be caring so deeply about basketball.

Those who know me closest know I’d never predict what will occur tonight. No way. I am far too superstitious, and LeBron is that superstition embodied; an omen of ill portent. I am buoyed by a faith in the Warriors; in their systems, their players, their staff. I am energized by the abilities of our most valuable players — Curry and Iguodala, the native son and the prized free agent — and hoping that the lessons learned from previous series will come together when it truly matters the most. But I refuse to take my eyes off of LeBron, a talent so total, so awesome, so absolute, so complete; who continues to create new ways to make the faithful suffer, who continues to guard the gate until he is relieved from duty. 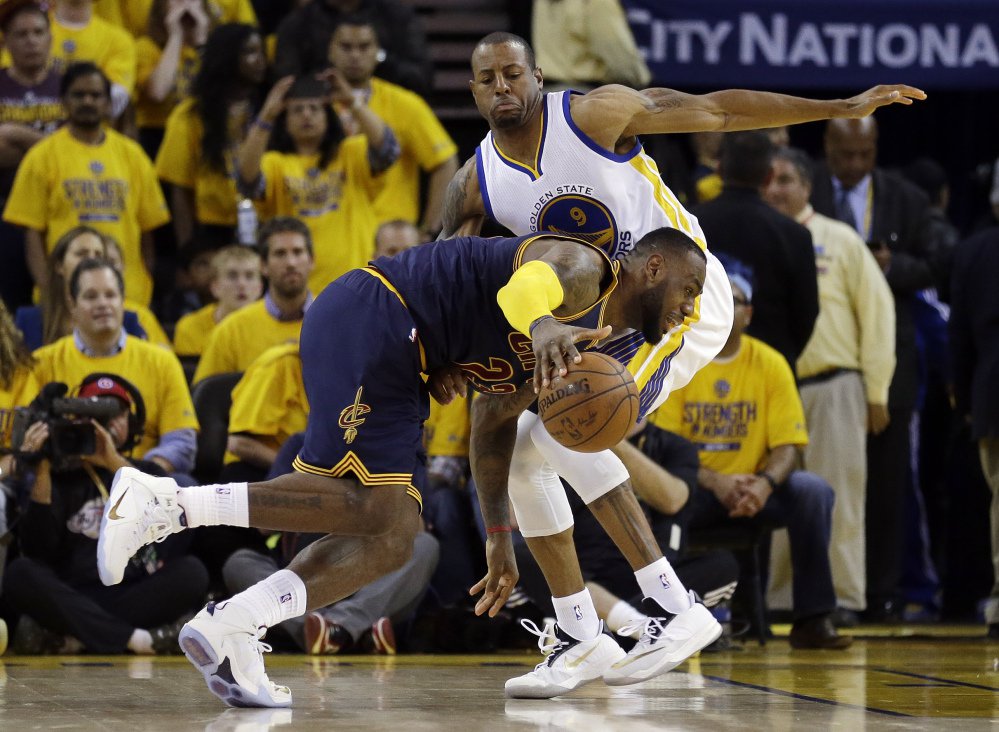 One Response to You, Too, Are Uprooted.