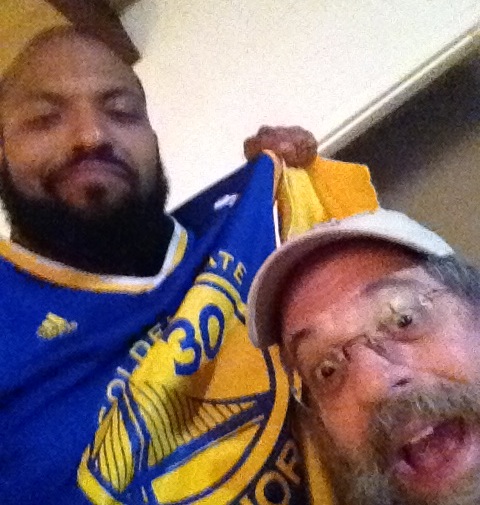 Stan Greenberg, loyal biological father of the last 29-and-a-half-years, came over to my shit-box apartment tonight to watch the game, and per his custom, he missed the opening tip, and the entirety of the first quarter. It wasn’t a big deal, since it never really is, for either of us. It’s a shrugging, insignificant sort of tardiness; one that has been informed by a lifetime of showing up to 9:00 morning meetings at 9:06, or picking up kids from school a cool 35-to-45 minutes after the final bell rang. I think I’d get grumpy about having to wait, and he was always apologetic, and that was it. No big deal, really. And no big deal, as far as watching basketball was concerned. Though my father and I have watched NBA ball on several occasions, I cannot recall a time he watched the tip of the game with me, even if we were in the same domicile, perhaps even the same room. Quietly, my father has perfected the art sauntering into the game just after the first conclusion of the first quarter; with the action fully afoot, boasting a plot growing deeper in developments, with an audience waiting to see what exactly will transpire. Even in this game — totally unlike any other game in either of our Warriors-focused lifetimes — my father could not make tip. True to form, he came in with about 10 minutes to play in the second quarter, with the Warriors struggling to get their offense going, and his son standing alone in his living room, holding 2013 Warriors playoff towel, wearing a Steph Curry jersey that has absorbed too many chip crumbs and beer driblets over the course of its life. “It’s not going well,” I said ruefully, not really offering a greeting. “I know,” he answered, not returning a greeting that never arrived, “I was listening on the radio.”

Watching basketball was never really a past time; not like the other pre-packaged American tales of father-son bonding that involve sports. Neither my father nor I were athletes, and neither of us played organized basketball — organized anything, really — for a school team. My dad was a star debater. I, myself, was a decathlete; an academic decathlete. If my father had athletic feats he wanted to relive vicariously through me, he never let me know; just as well, considering that I was anything but an athlete, and until my teenage years, a fan of televised sports. I, a raw, bespectacled mini afro-puffed blob of preteen angst, had no motivation to seek out sports on the television. My parents — bespectacled themselves, though that’s beside the point — somewhat set the tone. The one exception seemed to be the Warriors, which as far as I could tell, were the only sports team that got consistent airplay in my house after Michael Jordan retired from my mother’s once-beloved Chicago Bulls. During the late nineties and early aughts, from late fall until early spring, Bob Fitzgerald and Jim Barnett provided rollicking commentary for a high-octane team of perennial fuck-ups. The Warriors would play on the kitchen television while we ate dinner, and when my father and I were in the same room after the meal, we would crowd around the small screen, shake our heads, and laugh. Occasionally there’d be discussion; an attempt at critical analysis that often concluded with a head-shake, and a “my god, the fucking Warriors.” At that point, we’d both wander away from the game, and without warning, the Warriors would be getting blown out to an empty room, the cheap kitchen television croaking out an aria of irrelevance while the Greenberg family busied themselves in other rooms. 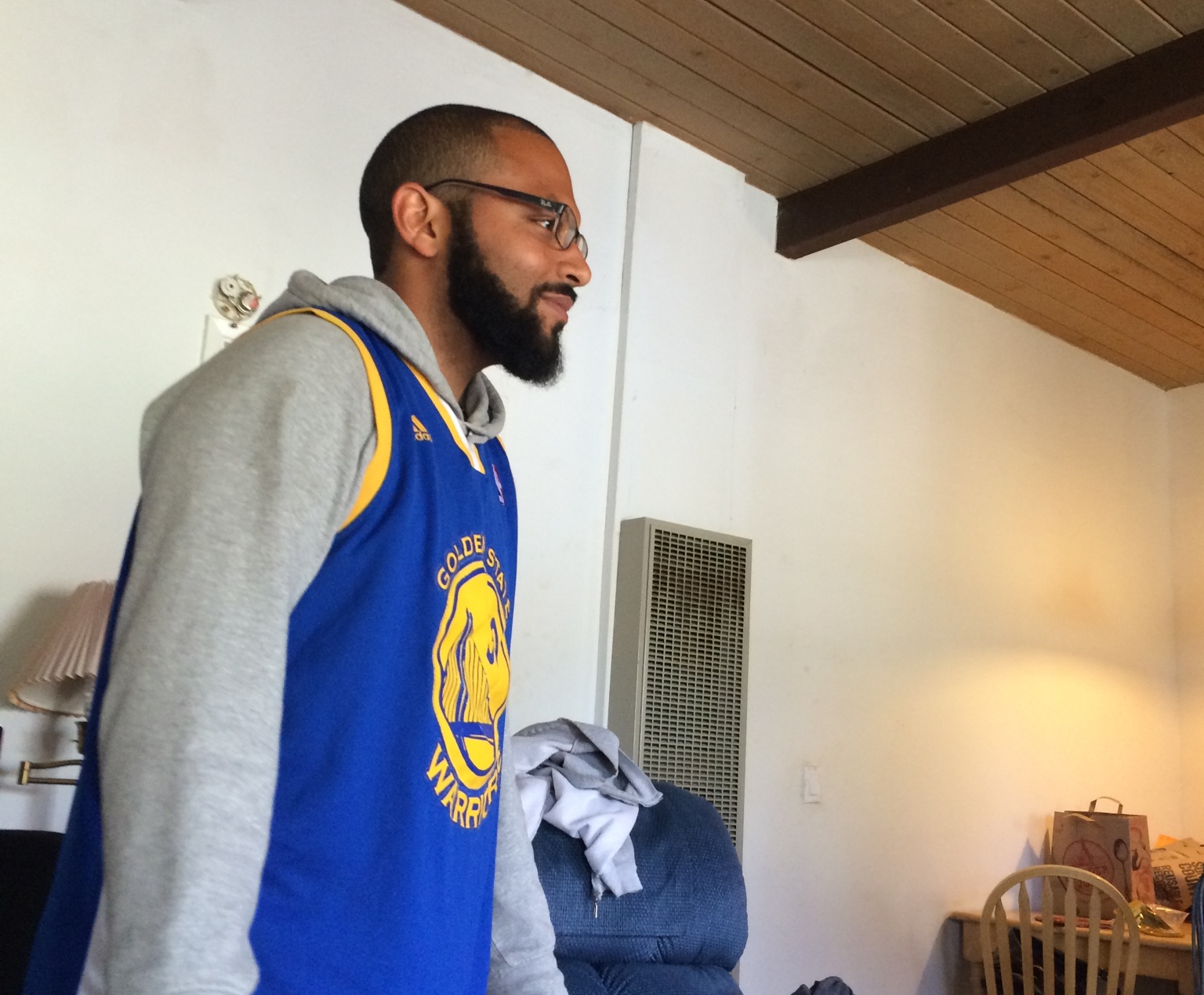 So there must not have been much for my father to say as he saw me standing in my apartment, pacing about an unkempt, ubiquitously ripe living room (something has gone dreadfully awry in my fridge), shouting at the top of my lungs whenever the Warriors made a basket. There probably wasn’t much to say at all. What do you say to a first-world flack fully unhinged; a barely functioning adult tightly wrapped in the proceedings of handsomely-paid millionaires, planning all aspects of his non-professional life around the nightly games of an annual postseason tournament? What exactly do you say to a fellow who has decided to place every pressing matter on hold while his favorite basketball team steadily works through the process of winning 16 games. What is there to talk about with a person who has committed to going to the NBA Finals at any cost, given that Finals trips happen about as often as Halley’s comet?  That is a person who no longer is behaving rationally; who has become too wrapped up in a drama that doesn’t really involve them, if it really can be called a drama at all.

While the Warriors conquered the Western Conference, basketball came up surprisingly little. It’s always been easy to watch the Warriors with Stan. My father and I chatted about his parents — both dead; neither would’ve cared the Warriors beat the Rockets — and whether the Baby Boomers would last as long as the Greatest Generation (dad thinks the Boomers will be felled early by bad diets). We discussed when we were going to go camping this summer, and whether we’d have time between my dad’s busy work schedule, and my busy NBA Finals schedule. When Klay Thompson committed his fifth foul, and Andre Iguodala missed four free throws in the final three minutes, he watched me pace back and forth, mutter-cussing to no one but myself. With each perceived injustice from the referees, he tolerated my epithets; my crude assessments of their character and acumen. He grumbled loudly when I forgot to hit “mute” on the remote control (“I have issues with background noise,” he kvetched, “oy, commercials.”). And when the excitement prompted a - gasp! - high-five from typically-stoic Stan, he marveled that you could connect on every contrived hand-slap if you just stare at the other person’s elbow. It was an excellent night of sport-watching with my father; a past-time that I didn’t even realize that we had. Stan Greenberg, loyal biological father of 29-and-a-half-years, stayed until the end of the game, and not much beyond that. The Warriors won; their 79th of the season. We both watched as gilded confetti drifted lazily down from the concrete bulwarks of Oracle Arena; as a roaring, yellow crowd rolled and pitched like a massive frigate in a storm. My phone started buzzing with notifications and texts; with people excited, congratulating, marveling over what had just occurred. He offered me a hug, and I returned it; that stilted hug that adult fathers and sons share and perfect over time; short, meaningful, probably a bit heavy on back-patting. “Come watch a game over at the house,” he suggested, to which I offered a guttural non-reply. Even though my parents live less than ten minutes away, the distance feels much greater, the older I get; the more wrapped up I get in other people’s affairs. There is something inviting about watching at least one Finals game on the television in a kitchen. I say that I’ll think about it. But before he goes, a final request:

“Hey dad,” I said, my hips already gyrating, my arms already starting to move, a shit-eating grin on my face, “get a picture of me celebrating.”