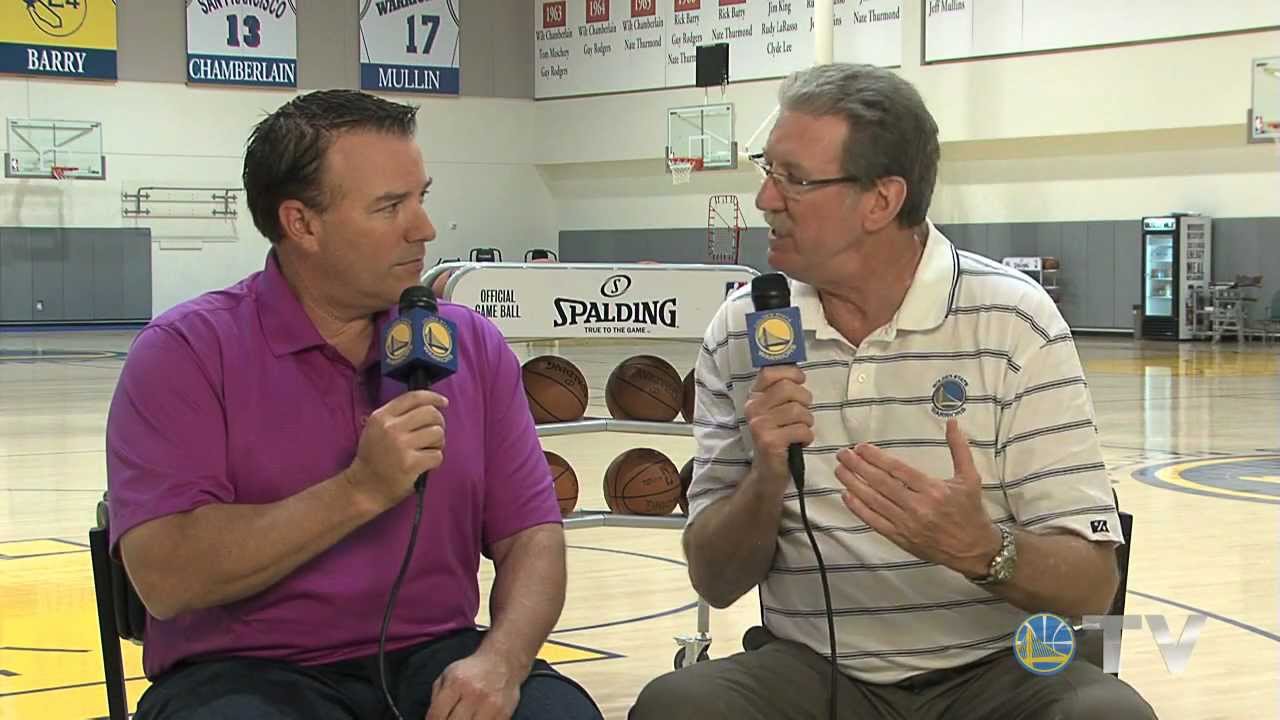 The Warriors won their final game of the season last night, 116-112 against the Denver Nuggets, to move to 51-31 on the season. There was little of note regarding this contest — it featured the second and third units of both teams — other than that, at around the nine minute mark in the first quarter, Bob “Fitz” Fitzgerald and Jim Barnett announced that their 21 year partnership would continue (in some form or fashion) into next season. At that point, thousands of Warriors fans, and fans of the league at-large, exhaled a huge sigh of relief. And though we won’t have to say “so long” to the beloved color analyst at the end of this year’s first round, Jim Barnett will begin the process of “retiring” from the Warriors after 29 years of service (most reports imply that he is being pushed out in order to take a new role with the team that will involve some broadcasts next year), and the team will begin to try out different personalities to take his spot. Some interesting personalities have been suggested. Tom Tolbert has been rumored as a replacement, especially after his strong performances alongside longtime radio broadcaster Tim Roye during last year’s playoff run. Brent Barry, currently with NBA TV, has emerged as another potential candidate. My dear colleague Kevin suggested Chris Webber, currently of Turner Sports, as a dark horse replacement. But in general, the sentiment has been that Barnett should remain in his current position to continue doing what he is lauded for doing: providing unbiased, entertaining, incisive and instructive commentary about the game.

But what about Bob? One almost feels like they don’t need to ask a question this silly. In fact, if one polled a group of random cable-subscribing Warriors fans, and asked them which member of the announcing duo they’d like to jettison, most would certainly pick Bob Fitzgerald as the odd man out. Where Barnett plays the role of cool uncle for NBA fans, regaling younger denizens with stories of a wilder, more primitive NBA where everyone flew coach and the players walked 15 miles to games barefoot, Fitz is the polar opposite, despite his best efforts. Most of the time, Fitz is almost like your nerdy uncle who just, in general, tries way too hard to be cool. Jim’s cool and experienced call is buttressed by Fitz’s excitable, loud voice; always prattling on during both spikes and lulls in the action. He has a grab-bag of hokey announcer words, and calls Barnett “Pard’ner,” like he’s Woody from Toy Story. He has tried to shove countless horrific nicknames down the throats of his viewers; the most inexcusable being the Human Torch moniker for Steph Curry, a nickname that made everyone cringe each time they heard it (and which was seemingly retired this season). In almost every way, Fitz seems like a less-worthy counterpart to Jim Barnett; a tabby who has been blessed to be paired with a cool cat straight out of the Aristocats.

Indeed, I would wager that many Warriors fans feel that the team is making two mistakes: getting rid of Jim Barnett and subjecting us to a continued existence with Bob Fitzgerald. Much of this has to do with the fact that we have been acquainted with Fitz for a long time, and that his relationship with the team, his colleagues and the fans, is complicated at best. As explained by Rich Lieberman, Fitz became the play-by-play man in the mid 1990s after winning the favor of former owner Chris Cohan, who already were unhappy with then-play-by-play man Greg Papa (who now heads the team’s pre-and-postgame shows on Comcast) who was calling games for the Oakland A’s at the time. Nearly 15 years later, Fitz’s relationship with Warriors ownership came under further scrutiny after Tim Kawakami discovered that Fitz (among other Warriors employees) were posting pro-ownership dispatches in fan message boards under fake usernames (but with highly traceable IP addresses). The news coincided negatively with the sale of the team to current owners Joe Lacob and Peter Gruber, and other troubling reports which suggested that Warriors ownership was paying Fitz’s six-figure radio salary (which gave him — and them- a platform to issue highly sympathetic takes about the omni-struggling team through his highly sophomoric radio show 12-3 pm weekday radio show “Fitz & Brooks”), and had signed him to a lucrative extension, while at the same time, stiffing his colleagues Jim Barnett and Tim Roye. In addition, Rasheed Malek of Warriorsworld reported that players were rebuking rather immature and self-conscious advances by Fitz to develop relationships that would be beneficial to his radio career. As such, most assumed that Fitz wouldn’t survive long into the new ownership, or survive at all. It is a surprise that he not only has survived in the new ownership, but has thrived. Not only has Lacob and company deemed Fitz the man to keep around. Through their actions, they have all but decided to build their announcing crew around him. This move hasn’t been widely celebrated by Warriors fans, who are reluctant to keep any aspect of the old, apologist guard around; especially it’s old public voice, who has managed to retain the good favor of his new bosses, and maintain his important position of influence.

Even if there wasn’t a large, vocal contingency firmly entrenched in their battle against Bob Fitzgerald, it is likely that there would be more sadness surrounding the departure of the color analyst, who is supposed to connect with the emotions of the average cable-watching fan. Jim Barnett in many ways is like the west coast version of Clyde Frazier; one without the trademark style and panache, but who commands the same amount of respect from both fans and league-types alike. In fact, it seems most NBA teams try and find this type of character to anchor their cable broadcasts. 27 of the 30 total NBA teams utilize a former player as their accompanying analyst, and the other remaining three (the Heat, Trailblazers and Kings) utilize a former coach. Unsurprisingly, the names tabbed as potential Barnett replacements are in this exclusive club as well. Though their styles are different, as are their resumes, all of these former company men are counted on to do the same thing: use their previous experiences in the NBA to provide definition to the broadcast, and add context to what is occurring on the screen, either through their own explanations, or with the help of a tool, like a telestrator. This is what Jim Barnett has been asked to do, through years of terrible basketball, and a few seasons of very excellent basketball (well, very good baskeball, at least). And as most people have established, he’s quite good at it.

However, the play-by-play man has a far more sticky existence, and in many ways, Fitz serves as a useful subject of analysis in terms of parsing out these persistent problems. Whereas we have a fairly decent idea about what makes a good color analyst, and who is the best fit for the job — that is, a former NBA player or coach who can entertain at least as well as they can explain — do we have the same clarity when it comes to play-by-play? What exactly makes a good play-by-play announcer? Who are the best at what they do? What traits are the most necessary? What qualities? Though they often talk more than any other individual associated with an NBA team, the play-by-play announcer has perhaps the trickiest job out of everyone. They must serve as the public voice of the team while the team does what it is meant to do — play basketball on the television for fans — and at the same time, strike a difficult balance between unbiased analysis and impassioned commentary. And while the national play-by-play guys like Mike Breen, Kevin Harlan and Marv Albert have long been championed for their ability to offer this middle-of-the-road analysis that can apply to any team, other local characters seem to fall along a much more subjective spectrum. They do not have the same experiences as the color commentator, so they must make up for lack of experience with added passion and panache. They do not have the same values as a fan, so they must try and formulate thoughts that will resonate with them. And throughout it all, they must be factually correct, and keen upon all the happenings in the league. It is not an enviable job.

There is lots of bad about Bob Fitzgerald. But, against all odds, there is also some good. His “homerism” — a highly subjective term relating to an individual’s proclivity towards preferring the team that he or she provides announcing duties for — is at times uncomfortable, but it falls in line with other play-by-play men throughout the league, who cannot explicitly bite the hands that (handsomely) feed them. He does linger on foul calls quite often, almost to the point of obnoxiousness. But at the same time, Fitz’s shrill voice compliments big plays nicely. His excitedly-stated “Good! Goooooood!!!!” has become a welcome counterpart to a big three by Steph or Klay, and a happy sound for Warriors fans to hear in the late-game nail biters that have become part and parcel with this team. His skills as a long-time radio host give him the skills to access the fount of knowledge that is Jim Barnett, and indeed, we likely wouldn’t know Jim as well as we do if Fitz didn’t prompt him to share relevant stories about his own playing career, and his thoughts on the proper ways to play basketball. While no one would think Fitz could leave the booth to go take Mark Jackson’s job, it is clear he knows the sport quite well, and has better knowledge of the league-at-large than some of his more provincial counterparts. And others have taken notice; Fitz is the voice for both men’s and women’s Olympic basketball, and has been since 2004. He is the play-by-play man for the San Jose SaberCats, and provides his services for other NBC-related sporting events on both television and radio. His abilities alongside Barnett have been worthy of seven Emmy’s — at least four won in conjunction with his longtime partner, and the first ever earned by the Warriors as a team. If we looked past these things, we would be pontificating with horse-blinders on; purposely seeing the most narrow of views.

It goes without saying that the best move is to #KeepJim, and allow him to flourish with a team that is just starting to make the long climb towards contention. There is a reason that fans feel strongly about his presence, and have gone out of their way to let Warriors ownership know that their forced retirement is an unwelcome move. And if most fans had their way, they would probably add a #DumpFitz hashtag to their Twitter activism. I’m not here to disagree with them, only to point out that while we have a decent idea about what makes a good play-by-play broadcaster, we have differing opinions on who best fills that role. And while Fitz doesn’t always meet the mark, he doesn’t always miss it either. Much like the players themselves, he, and other play-by-play men, are mixed bags more worthy of nuanced thought than breathless absolutes.

6 Responses to What About Bob?