As much fun as it is to watch these two (surprisingly) evenly matched semifinal series, I have to admit: I miss our non-playoff friends.  I feel like a nerd who became popular, got to hang out on the senior steps, but once I realized how much work it takes to be popular, and how much everyone actually hated me, I began to long for my old nerdy friends.  Invariably I’ll go through a series of trials where I have to ultimately choose between my new-found popularity and my old-trusted nerdom, but I’ll make the right decision in the end, and do lots of drugs throughout my twenties.

Wait, what was I talking about?  Oh right, basketball.  On tap for this week: assessing floor generals, bench generals, and John Brockman’s SWAG suit, in general.  Let’s get to it.

The media tells me that Steve Nash’s departure from the Suns is all but a done deal at this point, and I tend to agree with them.  While I can’t exactly check their sources, it doesn’t seem to make a lot of sense (from Phoenix’s perspective) to waste cap space on a 38 year old when you could actually be rebuilding your team in earnest.  And, of course, Steve Nash has gone above and beyond the call of duty to show his loyalty to an organization that really could have treated him a lot better.  If both sides can part ways on good terms, it’s really the best case scenario.

So the question now becomes: who replaces him?  With Nash and a few others coming off the books, Phoenix will have some money to spend, and luckily there are a few decent prospects on the market.  The most likely candidate is Goran Dragic, who backed up Steve Nash for three seasons before being traded to Houston.  He had a breakout season this year while subbing in for Kyle Lowry, averaging 18.1 ppg and 8.8 apg on 52% shooting (44% from deep). Of course, Dragic is a favorite here at The Diss, so I won’t subject you to my man-love for Gogi.  Simply put: he is the best candidate to take over for Nash.

However, replacing a former MVP and franchise-face with his former backup might not inspire confidence in Phoenix, despite Gogi’s eye-popping numbers.  So why not shoot for the moon, and make a run at Brooklyn Nets free agent guard Deron Williams?  According to Mitch Lawrence of the New York Daily News, the Suns plan on aggressively pursuing D-Will should Nash leave the Valley of the Suns.  Their main draw?  Golf.  Lawrence writes that “‘If they lose Steve, then they plan to go after Deron, hard,” said a person with knowledge of the Suns’ plans.  ’They know he loves golf and they’re going to try to sell him on going out there.’”

I’m no GM.  But if your strongest bid is golf — a sport that exists in every single NBA city — you may want to just overpay the former backup.  Gogi’s pretty good.  And his nickname is Gogi, for fuck’s sake. 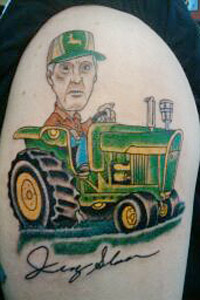 Meanwhile, way out in Bobcats country, Michael Jordan and company continue their search for the person to take over the team that won 10% of their games this season, and whose best player is likely going to be presumptive lottery pick Thomas Robinson.  Patrick Ewing, whom I had hoped would get a shot at the job, was reportedly told by Jordan earlier this week that he was not likely to be chosen.  Not a vote of confidence for Ewing, who has been rejected from every single head coaching job he has interviewed for (including this job, which was to take over a bona fide disaster).  With Ewing’s spirits appropriately crushed, the Bobs have moved on to the standards. Assistants Mike Malone and Brian Shaw have already interviewed, as has former Portand Trailblazers head coach Nate McMillan.

But the most interesting candidate to be interviewed so far is Jerry Sloan, former coach of the Utah Jazz and surefire hall of famer.  Sloan showed interest in the job from the very beginning, and has intimated to the media that he would likely accept the post if it was offered to him.  He is apparently undaunted by the Bobcats miserable record and uninspiring roster.  ”It’s a young team,” Sloan said.  ”We’ll see what happens.”

I will be blunt: if Jordan doesn’t hire Jerry Sloan, he is a fool.  Granted, Jordan has been down this path before.  He hired Larry Brown in 2008 (under a different owner), and though he supplied the team with its only playoff berth, the consequences were dire.  But Sloan carries none of the baggage that Brown does, or did.  Brown laid a trail of ruin through seven cities, while Sloan erected a monument of professionalism and class in one.  In all of his seasons of coaching, he has only had a sub-.500 record once (2004-5, when neither D-Will or Boozer were on the team, and with Stockton and Malone long retired).  He would be qualified to help build the team, develop its players, groom a successor, and bring some modicum of competence back to the moribund organization.

I mean no disrespect to Malone, whose work I admired in Golden State this year, or Shaw, who I hoped would get the Golden State job last year.  But when a hall of fame coach like Jerry Sloan is available, and wants you?  You just ask him where he wants to park his tractor. I live in Seattle and went to UW for a few years of a PhD program, and I can tell you that this city loves its Huskies.  Now, I went to an undergrad that had D-III sports, so I never adopted the big school mentality when I got here.  But since so many Seattle residents are UW grads (and likely moved to Seattle to go to the school in the first place), you see evidence of the school everywhere.  I haven’t really gotten used to it, despite the fact I’ve lived in Seattle for quite some time now.  It’s always a strange sight to see a bunch of muscular bros lumber into a bar with some badass purple shirts on.

But those bros have nothing against professional bro Jon Brockman, who actually has the word “bro” in his last name.  While the bros here just have purple shirts, or maybe a purple hat to show their husky pride, Brockman’s got a SWAG suit.

That’s right.  A SWAG suit.  SWAG stands for “Sweet Washington Athletic Gear”.  It appears to be a onesie.  BROckman doesn’t seem to care.  And neither do these other bros.

There was a reason I dropped out.

Jacob is a behaviorist by day, blogger by night, and founded the Diss. Follow him on Twitter @jacobjbg
View all posts by Jacob Greenberg →
This entry was posted in The Week That Was and tagged Deron Williams, Goran Dragic, Jon Brockman, Michael Jordan, Steve Nash. Bookmark the permalink.