Today is December 18th, which means almost nine months ago I was sitting in Oracle Arena, giggling at my Chris Mullin bobblehead. Less than a year ago, on the eve of his jersey retirement ceremony, that I was explaining to my girlfriend why I regretted never having gotten the Chris Mullin flat top for a free pair of tickets. 273 days ago I was listening as the usual cast of Warriors legends, the small cast of Warriors legends, spoke about the last great player to put on the blue and yellow.

I remember feeling proud that the Oracle faithful gave him a standing ovation every time he was shown on the Jumbotron. I remember feeling sad that for all the good players that came after Mully, none came close to having their jersey retired one day. Feeling sad for Webber and Sprewell, Baron and Monta. But most of all, above all else, I remember feeling complete and utter shock as the boos rained down on Joe Lacob’s head. Things could not be more different for the Warriors, with a recently completed 6-1 road trip leading to the kind of positive national attention we haven’t seen since We Believe. Whether it is Stephen Curry cracking NBA.com’s MVP Ladder or John Hollinger’s algorithm giving them a better than 90% chance of making the playoffs, you can’t swing a dead cat in Oakland without hitting boundless optimism. Hell, even the dunk of the season belongs to the Dubs.

But since that night nine months ago, the night that served as the culmination of 35 years of frustration, how much has changed? The team has had a few blips of success since the 1970’s, but ineffectual front offices have assured that success hasn’t been sustained. In the last nine months, Warriors leadership has been involved in the following situations: 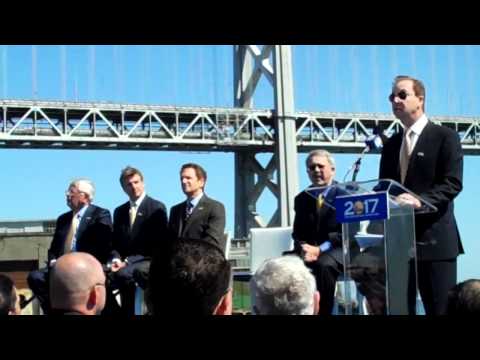 For now, everything is great. I am as optimistic about this season as anyone, and think the Warriors have a legitimate shot at winning the Pacific division and snaring a top-four playoff seed. I also believe the front office has done a great job identifying talent lately, drafting Barnes, Ezeli and Green, and acquiring Landry and Jack. The team is certainly better than I had any reason to hope for before the season.

But at times, I can hardly believe tell that Chris Cohan isn’t still the owner. The Warriors are still lying to reporters, congratulating themselves on deeds not yet accomplished, and displaying head smackingly poor decision making. Until things like accountability, transparency and commitment are more than just platitudes to the front office, I will continue to be skeptical of the Warriors’ long-term prospects.

Kevin “Franklin Mieuli” Draper was born and raised in Oakland, California, and loves it more than you can possibly imagine. Follow him on Twitter @kevinmdraper
View all posts by Kevin Draper →
This entry was posted in General and tagged Chris Mullin, Golden State Warriors, Joe Lacob. Bookmark the permalink.