One of the bigger failures of the NBA’s marketing wing has been the “Big” ad campaign, which has manifested itself primarily in the form of commercials over the past two seasons.  In each “Big” commercial, we are confronted with the same question: what, exactly, is so “big” here, and by extension, what “big” aspect about the NBA are they trying to draw our attention to in the first place?  The players?  The salaries?  The shoe sizes?  The personalities?  The television contracts?  All of the above? Indeed, although the commercials are varied and diverse, there has been no central theme that unifies them.  As a result, we have an inadequate understanding of what “Big” exactly means, and why it should be relevant to our interests.

But with its latest commercial, the NBA (as well as its ad agency Goodby, Silverstein & Partners, who also developed the wonderful “Where Amazing Happens” campaign) has stumbled upon a gem. It uses ideas of history, symbology, superstition and subjectivism to produce a simultaneously complicated and seamless message about “passing the torch” to a younger generation. At the same time, the newest “Big” commercial offers an assessment not only of the state of basketball in Los Angeles, but an indictment of of the mistakes committed by the front office of one franchise and a celebration of the achievements of the other. The performances of Chris Paul, Steve Nash and Magic Johnson push the “Big” campaign to a new level of meaning, and for the first time allows it to convey the deeper meanings and complicated messages it has attempted (and failed) to present previously.

The commercial, titled “The Disappearing Act”, opens with Chris Paul staring down Mike Conley in a game against the Grizzlies, broadcasted on a low definition television.  CP3 has clearly caused the Grizz great distress, as Conley barks out orders to his teammates, anticipating a high screen from an unseen big man.  We briefly see the visage of Magic Johnson, the cool glow of the ancient television screen illuminating his face, staring intently at the television screen as we watch alongside him.  But then we cut back to Chris Paul, who makes his move, then in a split second, disappears in a puff of smoke.  Ralph Lawler, the increasingly recognizable television voice of the Clippers, asks: “where did he go?” while Conley dances about on defense, hopelessly guarding an apparition.  Suddenly — poof! — CP3 briefly reappears, stutterstepping and juking wildly at the top of the three point line.  ”Unbelievable,” Lawler says.  But then, just as quickly as he’s there, he’s gone again, leaving Conley in the lurch and the viewing audience flummoxed. Paul doesn’t reappear on the court, but instead at a sports bar, where Magic and a fully uniformed Steve Nash — unseen until this point — are sitting and watching the game.  Magic looks surprised as CP3 poofs into the red leather chair, and gives Nash a “what the hell? How’s he here?” look. Nash cannot be bothered and continues to watch the Clippers game while chewing absent-mindedly on a french fry (an ironic choice considering how much Nash has emphasized healthy eating throughout his career).  Nash briefly looks at CP3 and offers him a wan smile before turning his attention back to the television.  CP3 chooses not to acknowledge Nash, but does take one or two of his french fries without permission, eats them smugly, and looks right into Magic’s eyes while his own twinkle brightly. “Shouldn’t you be going to the hoop?” Magic asks CP3, who turns and looks up at the television.  Then — poof! — CP3 is gone again as the room fills with Lawler’s voice screaming “Chris Paul!” as the dynamic point guard finishes his drive to the hoop by laying the ball up simply off the glass; a textbook Chris Paul play.  The commercial concludes with Magic looking into the television screen, smiling that iconic, timeless smile as the screen fades to black and the ubiquitous word “Big” appears on the screen.

To understand the full meaning of this commercial, we must parse the roles and significance of the three subjects: Chris Paul, Magic Johnson and Steve Nash. 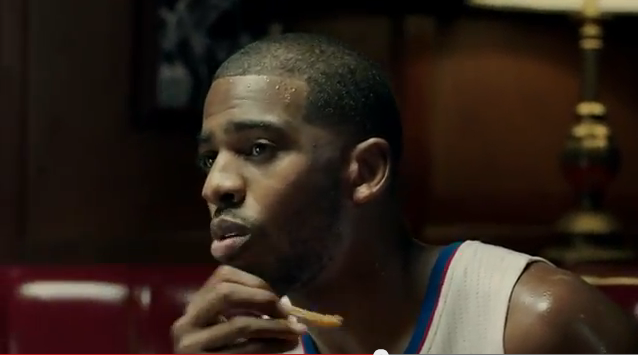 Understanding Paul’s role is the easiest: he is the new magician, the only player actually playing in the commercial, doing what he does best.  For all intents and purposes, Paul is a magician, a dynamic point guard who can not only improve teammates, but change the trajectories of entire franchises through his abilities.  Paul is having a statistically marvelous season, is a serious MVP candidate and is among the most marketable players in the world.  Moreover, he has ably played several roles over the course of his star-studded career: from small market superstar to free agent focus to his current role as the (co-)fortune changer of an eternally terrible franchise.  He is one of the NBA’s shining assets; a bright celestial being streaking across the night sky, performing magic right in front of our widened eyes.  We do not question the magic CP3 commits because he is, for all intents and purposes, magical. Things get murkier when we turn to Magic Johnson.  In this commercial Magic plays two separate but equally important roles: as the distant impartial fan and the ultimate intimate arbiter.  On the one hand, Magic is portrayed as an everyday joe; just another guy watching ball at a scrubby bar, loving what CP3 is doing on the screen.  He sits passively upon the garish red upholstered couch, dressed plainly (but professionally) in a blazer and collared shirt.  It seems almost blasphemous to say, but unless you are a fairly involved fan of the NBA (born before 1990), you might not recognize him at all.  Even to me, the days of him running the break and hitting game winning sky hooks are distant memories; now he’s mostly the guy who does the staid ESPN studio shows on Fridays and occasional ABC shows on Sunday.  The fact that he reacts so positively to the magic CP3 concocts on the court — indeed, in the same way you or I might smile at a sizzling crossover or yelp at yet another fatal midrange jumper — makes Magic an Everyman, someone who is relatable to us, who likes what we like and watches what we watch.

But Magic Johnson is still Magic Johnson; a man of many talents whose rise to global stardom came as the point guard of the Los Angeles Lakers.  If there is anyone who can judge what “big” truly is in the NBA, what actually matters and what deserves to be discussed, it is Magic Johnson.  He is in many ways still the king of Los Angeles, the standard bearer for point guard excellence, bar none. His personal legacy and the legacy of the vaunted Showtime offense he orchestrated still casts both glorious and gloomy shadows across the Lakers new home at Staples, and for the Lakers team currently playing there.  It matters deeply that Magic is watching CP3 do a new version of Magic in the Staples Center — the Lakers are not sole tenants — and is enjoying every minute of it. Which brings us to Nash; the silent man, the one who is guilty by association.  He is the “other” point guard in the Staples Center, whose team, despite its recent win streak, still sits at 21-26, guilty of ignoring the warning signs associated with decline and decay.  Their project has failed, and by extension, so has Nash.  There is no way he can be considered the new magic man in Los Angeles.  There is no reason to pay attention to him at this point.  Indeed, it is just as telling that Magic is watching CP3, and not Nash; there is no reason to think of him as relevant, no reason to take him or his version of the Lakers seriously.

“The Disappearing Act” produces many strong messages, and perhaps some stinging indictments.  The commercial presents three recognizable characters who represent three distinct identities.  CP3, the magic man, serves as the new hero, worthy of our attention and praise.  Magic, the fan and judge, can be relied upon to acknowledge what truly can be considered magic in terms of basketball.  And with Nash, we see a man marginalized, a victim of a failed plan, relegated to silently watching those more magical than him do things he can only dream of at this point.  When the magic happens both on the television and in the bars where we watch the games — watch CP3 appear with a poof next to you — it is a “big” moment; something worth pausing and considering.  Magic emphasizes this through his dual acknowledgement of CP3′s brilliance as a Clipper while simultaneously ignoring Steve Nash’s mediocrity as a Laker.

One of the problems of the “Big” campaign has been its uneasy use of concrete imagery to produce a muddled message.   “Where Amazing Happens” — which served as the NBA’s primary ad campaign for several seasons before “Big” — was successful chiefly due to its (overstated) simplicity.  There was no confusion about the themes that were presented in the shorts, which were uniformly filled with dramatic, swelling piano music and either slow motion video or still images of poignant NBA memories. It was an uncomplicated message; powerful enough to stay fresh for a few years before being retired for the more abstract, distant, “Big” campaign.  While the heavy close ups and atmospheric music remained unchanged, the message was unclear.  The opaque messaging, presented through clunky imagery, left it hard to find anything to identify with, and “Big” remained a mystery.

The messaging in “The Disappearing Act” is where this particular “Big” commercial succeeds, and its brilliance in terms of delivery, as well as use of symbolism, historical contextualization and superstition sets it apart from its earlier counterparts.  Through the magic of CP3, the judgement of Magic and the shunning of Nash, presented in the familiar seedy bar and broadcasted through the familiarity of the low definition television, the “Big” campaign finally reaches its audience and achieves an impressive vantage point.  ”The Disappearing Act” is as much an assessment of the state of the NBA as it is a marketing ploy; an impressive feat and laudable achievement.