Sample Size Matters! NBA Observations From a Guy who has Watched No Basketball, Pt. II Editor’s Note: Infrequent contributor Hans Peterson drops by to deliver his end-of-season guesses about what happened this NBA season.  Hans is a PhD candidate at the University of Minnesota, and has written other good stuff for The Diss.

I have an important announcement to make: I have made it as a writer. I know because earlier this week I was approached by the founder of an only mildly obscure NBA blog specifically asking me to write a post precisely because I had no firsthand knowledge of the NBA this season! It’s as if I, an organizational leadership PhD student, were approached by a colleague to serve as a second author on a biomedical engineering research article. Unfortunately, my current post involves approximately the same amount of payment as second authorship on research articles (that would be no dollars, if that was unclear). Nevertheless, hurray for me!

But I digress.  One month into the season, I posted my thoughts on the state of the NBA despite having watched no games, using only the wonder of endless statistics and data available on professional sports. It looked a bit like this (actually, it looked exactly like that). Now, as the end of the season is upon us, and the number of full games I’ve spectated this year remains less than one, I am offering a follow-up series of speculative observations based only on my previous NBA knowledge and secondhand sources. The only exceptions are the fourth quarter of a Lakers game I watched in January to satisfy my curiosity with their ineffectiveness (they can’t stop anybody), and the 3rd quarter of the streak-breaking Heat – Bulls game that I checked on periodically since it was on during my trip to the gym. I only shared that second note so I could tell the internet I went to the gym. * One month into the season, I deemed the Pacers and the Nuggets the two biggest disappointments at that point. It appears they are each currently third in their respective conferences, and the Nuggets recently concluded an impressive win streak that would have been more newsworthy had they not been overshadowed by the Heat’s record pursuit, and also had they not been a team in a mid-market city whose most prominent player is Andre Iguodala? Ty Lawson? I don’t even know. Anyway, I deem the Nuggets and Pacers success a win for sample sizes, me, and the “team” concept. Sample sizes because this is a good example of why one month may not show much about a season, me because I was apparently not totally off-base in thinking that the Nuggets and Pacers should have been more competent than they had been, and “team” because they are each third in their conference even though I am looking at their rosters, and who are these people? The Pacers are about to win 50 games and Danny Granger has played 5 games? Gerald Green and BOTH Hansboroughs play for a 50 win NBA team? Ok. I have three reactions to this. The first is that there are too many teams in the NBA. In a sport with only five players on the court at a time when officials will all but openly cheat in favor of superstars, it shocks me that teams with no top 10, and perhaps even no top 20 players, could be considered contenders. However, my second reaction is that I like the apparent parity, even if I do not believe for one second that a team other than the Heat, Thunder, or Spurs is winning the title this year. My final reaction is that may be possible that only one season of NBA neglect has left me completely out-of-touch with who the NBA greats are. Is Paul George a legitimate star now? Is Faried?

* As someone who had a bit of optimism about the Minnesota Timberwolves heading into this season which was quickly stifled by a litany of injuries, it is disheartening to see how much more adept the Timberwolves’ fans have been at judging prospects than the team in the last few years. I recall sitting in a bar giddy with the Rubio selection and cheering for a Stephen Curry-Rubio backcourt. Oops. Well, Rubio-Johnny Flynn has been almost as good, right? Then just one year later, I sat in a bar surrounded by fans ready to take a gamble on a potentially exciting duo of Demarcus Cousins and Kevin Love. Instead Kahn took a 24 year old who could not dribble and had no man-to-man defense experience. Looking at the Nuggets/Pacers rosters and results, it is pretty disappointing to imagine what a Rubio-Curry-Kirilenko-Love-Cousins lineup could do next year. Anyone can be a Monday morning quarterback, but I think there was a pretty solid consensus among Wolves fans pushing for the Curry and Cousins picks instead of 2/5 of the Syracuse starting lineup. Those two decisions alone are going to be crippling for about 10 years. 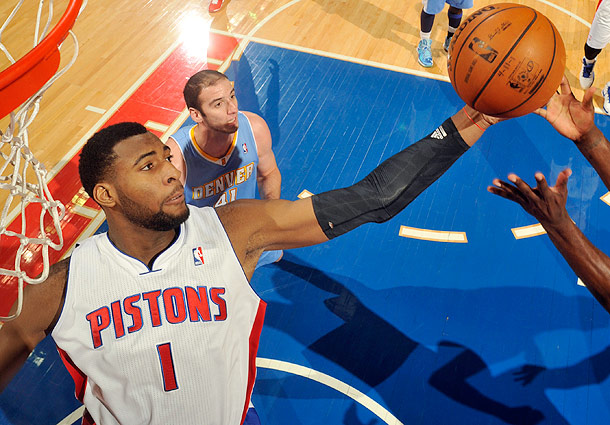 * But, to add some balance to any assessment of my talent evaluation skills, I also confess that I considered writing an article after the last draft making fun of the Pistons for drafting Drummond and completely ignoring all historical lessons about athletic specimens who may not even know the rules of basketball. Looking at Drummond’s 20+ PER in 20 minutes per game, I’m feeling pretty good that I was too lazy to write that article.

* I heard some hubbub about Lebron James going back to Cleveland in 2014 to pair with the exciting young Kyrie Irving (another draft snafu – I thought he’d be good but unremarkable). The fact that just about everyone, including me, thinks this single transaction would make Cleveland a title favorite is the best testament I can imagine to Lebron’s greatness. Irving or not, they have a worse record than Washington at the moment. Does sticking Kobe on that roster even get them to the playoffs in the Eastern Conference? And Lebron makes them top 3? That’s astonishing (but defensible, they went from 61 wins to 19 after he departed). I’m a true MJ loyalist, but by the time Lebron’s done, I suspect he is going to be quite clearly the second best player of my lifetime.

* A slight digression: I was looking at the Hornets page to check in on Anthony Davis post-injury (Solid. I don’t know if I believe the last draft is going to produce a truly elite player, though), and they have a player named Terrel Harris who is making 94k this year. Can you imagine what it must be like to be a player in the NBA making 94k a year? I didn’t know that was still possible. 94k sounds pretty good to me, but if you had co-workers who worked 6 minutes a day and earned 6 times more than you I don’t think being solidly upper-middle-class would be much comfort. I’m universally declaring myself a fan of any NBA player who makes less than the average chiropractor.

* I was trying to focus on topics that have probably not been beaten to death by this point in the season (I’m guessing that Terrel Harris may have just gotten his first press on this blog today), but Lebron has the 7th best field goal percentage in the NBA?! Really? He has a better field goal percentage than Blake Griffin? That is outrageous. He’s shot 1300+ shots! The only other players in the top 50 in field goal percentage with more than 1200 shots are Durant (30th) and Aldridge (31st). 250 of Lebron’s 1300 attempts are threes. Just looking at the statistics, I think that if Lebron were playing for any team other than Miami, New York, OKC, San Antonio or the Clippers, I would just double-team him full-time and thus leave an NBA player completely unguarded for the entire game. I’m not even sure I’m kidding.

* I can’t believe there is going to be an NBA team called the Pelicans.

* I can’t believe the Bobcats are still an NBA team. We should call THEM the Pelicans.

* The Nuggets are 36-3 at home and 18-21 on the road?! What is the biggest home-road record disparity in NBA history? Google’s failing me on this one, but the Nuggets have to be close. I know Denver has thin air, but are they playing underwater there too? 36-3? Here’s a question: if the Nuggets had home-court advantage through the playoffs, would you give them the advantage over the Thunder in the Western Conference? I’m thinking no, but again, I haven’t seen either team play five minutes all season.

* If the playoffs started now, I would really only be interested in the NYK vs. Boston and Clippers vs. Grizzlies first-round series. For all the apparent Western Conference parity, I don’t think anyone but the Heat, Thunder, or Spurs can/will win it all. And you know why? Because I didn’t watch any basketball this year, so I’m going to assume Carmelo doesn’t play defense, Blake Griffin is overrated, and Morehead State does not produce impact NBA players. But maybe I’ll even watch a few games to find out. One Response to Sample Size Matters! NBA Observations From a Guy who has Watched No Basketball, Pt. II