Monday Media: NBA Players, Past and Present, Are Speaking Up Michael Jordan was criticized because he refused to take a stance on political and social issues. Famously, when asked why he wouldn’t support Harvey Gantt in his US Senate race against racist scumbag Jesse Helms, Jordan supposedly replied, “Republicans buy sneakers, too”. Marketing was always more important to Jordan than morals, and his precedent influenced a generation of athletes. Jordan set the bar so low that it was both gratifying and surprising to see LeBron James take a stand on a political issue, even if tweeting out picture is a relatively benign form of political engagement.

Slowly, slowly, it seems the mountain between basketball players and social issues is crumbling. In 2012 a superstar stood against racial profiling and Stand Your Ground laws, while in 2013 a journeyman became the first openly gay player in a major American sport. Jason Collins coming out wasn’t so much of a political statement as a personal one, but that’s often the way it goes. Recently, retired NBA players have been getting into the act too. 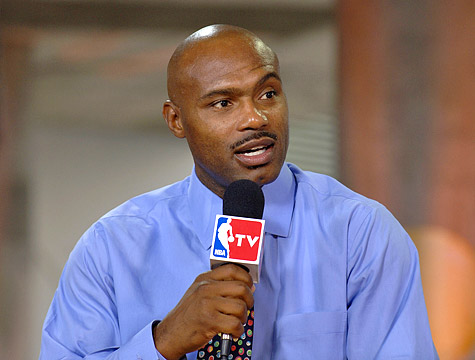 In 2007 Tim Hardaway was asked about playing with a gay teammate in the wake of retired center John Amaechi coming out, and Hardaway responded:

Since then, Hardaway has worked hard to repair his image. More importantly, he seems to have worked hard to repair his morals. First came the inevitable apology and instant banishment from the NBA, and you wouldn’t be faulted for thinking that’s where it would stop. But in 2009, Hardaway sponsored a fundraiser for a suicide prevention hotline for LGBT youth. In 2011 he fought the recall of three politicians in El Paso, Texas—where he went to college and popularized the UTEP 2 Step—who were being opposed by religious conservatives angry about their pro-gay stances. Earlier this month, his metamorphosis finally complete, Hardaway’s became the first signature on a petition to legalize gay marriage in Florida.

Hardaway utilized the best public relations strategy possible: looking deep within himself and fighting to become a more compassionate human being. Somehow, someway, Hardaway has become even more well-respected than before he uttered hateful comments.

Former Net (and Hornet, Trail Blazer, Celtic, SuperSonic, Pacer, Hawk and Clipper) Kenny Anderson has engaged in the same rumination as Hardaway, but under very different circumstances. Anderson decided to go public with a secret he held onto for thirty years, revealing that he was twice sexually abused as a child. He is telling his story in a performance called The Penis Monologues, and recently sat down with the SBNation team for an interview about. Telling his story has acted a as a sort of catharsis that Anderson hopes will help other victims of sexual abuse.

Hardaway’s actions are political, Anderson’s personal and Collins’ both. Together they act as a glacier, slowing carving through the notion that the best athlete is seen, not heard. To mix extreme weather metaphors, hopefully it’s just the tip of the iceberg. One Response to Monday Media: NBA Players, Past and Present, Are Speaking Up