Despite the overwhelming success of my team, Summer League just couldn’t hold my attention very long.  The games themselves were largely uninteresting — you won’t see the vast majority of the players on the court in an NBA uniform, so it’s not really worth getting too invested — and with the most marquee name being likely 10th or 11th-man Kent Bazemore, I really wasn’t buying the echo-chamber hype coming from Las Vegas.  Moreover, free agency has entered the yawn-inducing phase where bad teams fight the urge to bid against themselves (you know Milwaukee wants very much to not have to pay Brandon Jennings more than $12 million a year, but they need to sit down and wait for the urge to subside before they just do so anyways), and now that Dwight’s departure freed up some amount to cap space for 2014, I (and we) have to endure a discussion about whether LeBron and Melo will join forces to help Kobe win two or three more rings (spoiler alert: no).  As such, I was delighted to be able to find respite in this small piece by the timeless Tzvi Twersky (oldies like me fondly remember his work in SLAM [print] magazine) about Delonte West, the diminutive combo guard who hasn’t played in the league since October 29th, but who would very much like to get back into the business of playing basketball.

Now, it isn’t that West’s story is much different than any other former NBA player on the outside, looking to get back in.  While the uniqueness of West’s struggles with mental health have been thoroughly chronicled (though whether they’ve been chronicled well, or fairly, is another matter altogether), this is a fairly oft-repeated trope in the NBA.  Twersky’s interview of West emphasizes the crux of West’s problem with getting back to the NBA: his off-court troubles, and the considerable amount of external matter that Delonte West’s name has associated with it.  Seemingly, it isn’t a matter of his skills.  “I had tears in my eyes watching games this past year—not because I’m bipolar, but because I’m sitting at home and miss the game” Twersky quotes West as saying. “When my agent calls, I’m going to be on the next flight. Not to be cocky, but some teams that are trying to win are one guard away, one guy that can make a couple great plays away from going to the Finals.”  This may seem like lofty words for a man whose chances of making an NBA roster — let alone the roster of a contender — but it’s clear that West’s confidence is still high. “What I’m excited about is that I haven’t even scratched my prime,” he is quoted as saying. “Just give me a jersey.” For me, West will always be connected to another guy who’s just looking for someone to give him a jersey: Mo Williams, until recently of the Utah Jazz.  Of course, Williams and West formed the starting backcourt of the 2008-2009 Cleveland Cavaliers, a 66-16 regular season outfit that represented LeBron’s best chance to win an NBA championship before he departed for Miami and left Cleveland saddled with a lengthy rebuild project.  While that 2009 team’s legacy has been mostly defined by their playoff collapse on the NBA’s biggest stage — they ran into an Orlando Magic team playing their best basketball of the season, as well as Dwight, Hedo Turkoglu and Rashard Lewis playing the best basketball of their careers, up to this point — it would be irresponsible to forget how exciting and skilled of a regular season team they were for those who took the time to watch them.  Granted, LeBron was still LeBron (though Cleveland’s somewhat muted version of LeBron; a multi-talented forward relegated to running isolation plays for himself at the top of the key), and that’s what made the Cavs most appealing to a broad audience.  But even the casual fan could appreciate West and Williams, the small starting back-court, as among the more compelling parts of the team.  A small but lightning quick duo, West and Williams became prized trinkets for casual fans like myself; everymen-type players at the top of their games, able to feed off each other and, for a time, defy the narrative that bigger was better.

They were incredibly fun to watch together.  Williams wore the label of “LeBron’s Second Scoring Option” well, utilizing a quick handle and deadly mid-range game to set himself apart from other guards.  West belied his stature, and evolved into a perfect off-ball option, able to cycle through the roles of facilitator, scorer and help defender easily.  They would swarm the floor in unison, scrambling around screens while LeBron facilitated the offense from the top of the key, coming hard off of screens and hitting jumpers, or re-facing the basket and driving with impunity.  At the time, the two guards seemed like ideal fits next to LeBron’s Cavs, who behaved that season like a lovably obnoxious “look at me, too!” entourage around a childhood-friend-turned-famous.  Both clearly enjoyed the spotlight that came with King James’ vibrant starlight, shaking, baking, driving, diving and their way into the national consciousness.  Playing next to LeBron elevated both their games and their statures.  The soon-to-be-MVP was able to essentially throw a tantrum to get Williams into the All-Star game as an injury replacement for Chris Bosh.  And for his part, West averaged career highs in all statistical categories, and elevated his scoring by 2 points per game in the playoffs.  There were few backcourt duos that were more fun to watch in the entire NBA.  But of course, we know how that whole thing ended; the 2009 playoffs, the LeBron era, all of it.

Regardless of who exactly is offering the assessment, and regardless of the arena, a professional NBA player is judged by a variety of metrics, all of which are weighted differently, either by the individual or society at-large.  Such assessments can be limited to just the actions of (and reactions to) the player, or they can be used to offer broad assessments about a group of people, or a concept, altogether.  The complicated trajectories of West and Williams put the harshness of holistic analysis on full, brutal display.  Williams himself has seen a steep decline in his reputation and worth; his numbers dropped off in 2010, he moped on-and-off the court throughout 2011 until he was traded at the deadline for Baron Davis (only to lose his starter’s job after CP3 arrived in Los Angeles in the 2012 season), and spent an inconsistent and injury riddled year as the part-time starter in Utah.  Now he’s waiting for a call, presumably to be the second or third point guard for any NBA team that will accept his services for a number that meets his (and his agent’s) liking.  And West, as we know, is unemployed as well, seeking a call as well.  And if we are to believe Twersky’s latest work — we have no reason not to — it seems that he would accept a call from just about anyone, whether it’s related to basketball or not. 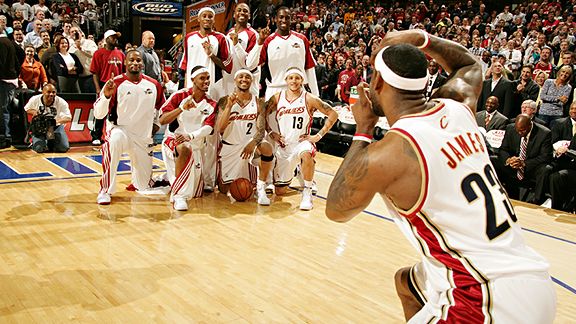 History is long and complicated, and no event should be considered without considering the other events that led up to it.  And while the Cavs six-game defeat to the Magic in the 2009 Eastern Conference Finals was decisive enough to make “What If?” questions seem more like a stretch than usual, it’s hard to not consider what would have been different had the Cavs won a championship, or at the very least, made it to the Finals.  Of course, most questions would focus on LeBron’s eventual decision in 2010, and whether he would’ve stayed in Cleveland for the long term (I believe he would’ve gone to a bigger market regardless).  But there are other questions too;  Would the success of a small backcourt in Cleveland comprised of two players under 6’3” have kept the ill-fated “can’t work, won’t work” duo of Monta Ellis and Steph Curry together for a few more seasons in Oakland? Would a reduction of the expectations around keeping LeBron produced a more welcoming work environment that could’ve supported both Williams and West in the long-term, both as contributing players and marketable figures?  Simply put, and with all hypotheticals notwithstanding: would both men have jobs today?

I wish West were right; that it comes down to a single story-line or failure to make the mark. But nothing occurs in a vacuum. Much of where West is right now is due to what happened a few seasons back; regardless of the fact he helped the Cavs win the most games in their franchise’s history, and that he was one of the more recognizable and appreciated players in the entire league.  It doesn’t seem to matter that, for a time, West and Williams were mentioned among the best backcourts in the NBA; a perfect compliment — and perhaps even the final reason — that a transcendent player would need for a championship.  That image is fleeting; more of an apparition than a solid recollection.  The Cavs are rebuilding.  They have moved on from West and Williams, the starting back-court for Cleveland’s most successful regular season team of all time.  And right now, it seems like the rest of the league is trying to figure out if they’re collectively moving on as well.

In any case, here’s to hoping Delonte’s phone rings soon.