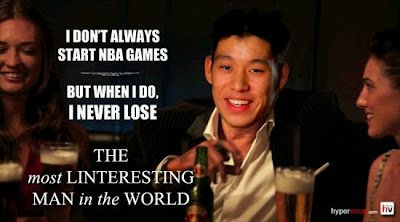 Every part of me wants to do a “Week That Was” that doesn’t mention the words “Jeremy” or “Lin.” But that’s no longer possible in today’s NBA. A specter is haunting New York — the specter of Linsanity.

Anyways, on tap for this week: signs of concern in the City of Angels, on forgiving and forgetting, and some tangible proof of what a major market can do for you (and your growing brand). Let’s get to it. The Mike Brown era has gotten off to a somewhat rocky start in Los Angeles. The Lakers, at 17-12, are currently the fifth seed out West. Though their defense only allows their opponents to score 90.4 points per game, good for fourth in the league, they are a truly terrible offensive club. They only manage 92.5 points per game, placing them at 24th out of 30 teams. Moreover, the Lakers are in the bottom third of the Association in a number of important statistical categories, including steals, assists, three pointers attempted, three pointers made, and field goal attempts. Indeed, they’re riding a two game winning streak, and have won six of their last ten overall. The team has struggled with scoring, defensive intensity (strange to type “intensity” without an “L” at the beginning), and now, seemingly, locker room chemistry, especially between player(s) and coach.

Two interviews this week gave glimpses into what might be a devolving situation in the Lakerslocker room. This past Friday, forward Metta World Peace, who, statistically speaking, is having the worst season of his career, pointedly questioned Brown’s lineups and background, and additionally asserted that he wasn’t in touch with his veteran squad. “I’m trying to win,” World Peace said to Ken Berger of CBSSports.com, “and right now, coach is a stats guy. His background is video coordinator or whatever. So he’s all stats. But Ron Artest is all feel. He doesn’t understand that.” Additionally, forward Matt Barnes, in an interview with Dan LeBetard on “Dan LeBetard is Highly Questionable”(with a hat-tip to Kelly Dwyer at “Ball Don’t Lie”), seconded World Peace’s sentiments, although he couched his opinions behind the deceptive language of competitiveness. At around the 1:38 mark of the interview (and the entire interview is worth watching, MB is a smart dude), Barnes somewhat passive aggressively wonders if Mike Brown’s defensive match-ups played a role in Lin’s 38. “I wanted to guard him the whole game,” said Barnes, “and I know Ron wanted to guard him the whole game.” Mike Brown, however, seemed unfazed. In the greatest comeback a coach could have against a player who questions his ability to separate stats versus “feel”, Mike Brown said: “Metta, if I were a stats guy, you wouldn’t be playing at all.” Zing.

Mike Brown is known as a defensive coach, and was hired to change the Lakers defensive culture moving forward into the post-Phil Jackson era.However, while Brown can hang his hat on his quality defense, he should neither ignore his team’s offense, nor the opinions of his players, who have been teammates longer than he has been their coach. It is a dangerous game to play, and Mike Brown could certainly end up unemployed yet again. 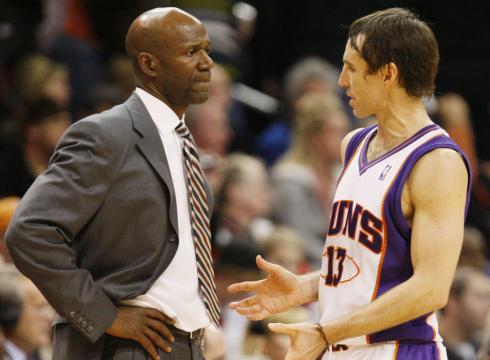 Consider the cautionary tale of Terry Porter. After the 2008 firing of Mike D’Antoni, then-GM Steve Kerr hired Terry Porter was hired to instill a defensive mentality into the Suns. The organization had let D’Antoni go because he refused to heed former Kerr’s advice about hiring a more defensive-minded coaching staff.Terry Porter was meant to fix that problem. However, about halfway into the season, it was clear that Porter was trying to fit a square peg into a round hole. The Suns, at the time, were a veteran team that had been used to the freedom of SSOL, and for them the offensive struggles that came with instilling a defensive system were seen as an unacceptable side effect. So, Kerr listened to his players (whom, coincidentally, were also the organization’s highest paid employees), and axed Porter after 51 games, despite the fact the Suns were 28-23, and ninth in West. D’Antoni holdover Alvin Gentry was promoted to head coach, and crafted a scrappier version of SSOL offense which carried the team to the Western Conference Finals in 2010.

So remember, Mike: they can’t fire the players. Only you. Tonight, LeBron returns to Cleveland for the third time since he left the town feeling somewhat jilted in July 2010. The story of The Decision and the fallout from LeBron’s departure has been well chronicled and does not need to be recounted here. What is worth noting, however, is LeBron’s latest mention that he would be open to returning to Cleveland as a free agent once he could opt out of his contract in 2014. He has mused openly about returning to the Cavs in the past, and the comments today were his most wistful yet. “I think it would be great, it would be fun to play in front of these fans again,” LeBron told reporters after a practice Thursday at The Q. “I had a lot of fun times here,” he continued, “you can’t predict the future. Hopefully you continue to stay healthy. I’m here as a Miami player and I’m happy where I am now but I don’t rule that out in any sense. If I decide to come back, hopefully the fans will accept me.” While the jury’s out on the fans, the current Cavs players seem unexcited about the prospects of his return. “I don’t think he’d be welcome,” said guard Daniel “Boobie” Gibson, who played with LeBron from 2006 to 2010, “not with the way that went down. It was a pretty tough situation. I’m sure they wouldn’t feel comfortable with that at all.”

Well, perhaps. Perhaps not. In any case, as a fan, it’s sort of interesting to think about LeBron on the Cavs in 2014, since it seems like the 2014 Cavs will likely be pretty good. Right now, the team is 11-17; tenth out East, though they were a playoff squad before Linsanity took hold in New York. Regardless of their record, the Cavs roster is pretty intriguing. Point guard (and current franchise face) Kyrie Irving is a surefire future All Star, and Tristan Thompson is having a wonderful rookie campaign. They have good, young role players in Alonzo Gee, Christian Eyenga and the aforementioned Boobie Gibson. Anderson Varejao (currently sidelined with a broken wrist) is one of the most efficient centers in the league, and one of LeBron’s all time favorite teammates. And LeBron? Well, he’ll be 29 years old in 2014 — likely at the apex of his athletic prime — and will still have six-to-eight seasons of productive basketball left in the coffer. And, Kyrie Irving can take the big shot in the fourth quarter, so LeBron can take a load off. A team built around LeBron (11 seasons played in 2014), Irving (3), Thompson (3) and Varejao (10) in 2014 is potentially a championship contender. You think Cavs fans wouldn’t welcome him back if it meant a championship? Additionally, you don’t think LeBron thinks about the fact he didn’t win one in Cleveland? This seems almost too perfect. 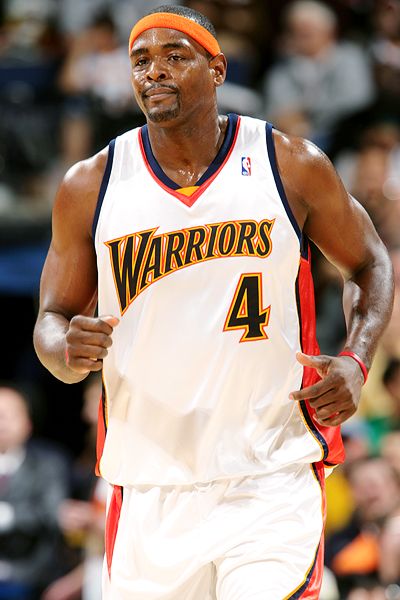 However, it should be noted that homecomings, especially in the NBA, never go quite as planned. A number of All-Stars, and even Hall of Famers, have tried to recapture their halcyon days of youth in the cities where they became household names, and it rarely ever goes well. Consider Chris Webber, who at 34, returned to the Golden State Warriors, only to play nine games, and retire in late March due to lingering knee issues. Or Scottie Pippen, who signed with the Bulls as a 38 year old free agent in 2003, and delivered 6 points on 37% shooting in a season mostly lost to injury. And what about 33 year old Allen Iverson, who tearfully returned to Philadelphia in 2009 on his last-chance reunion tour, only to remind his fans how far he had fallen before finally hitting rock bottom himself? And finally, we can’t forget about 35 year old Big Ben Wallace, who still toils for the nearly unwatchable Pistons club he returned to in 2009 at age 35; a club that couldn’t be further away from its contending days from 2001-2008.

That said, LeBron would only be 29 when he could rejoin the Cavs. And, I wager that even in his mid thirties, LBJ will still resemble some version of his prime, will still score 25-30 points per game, and will still, in most cases, be the best player on the floor. So, Cleveland: I don’t care how bad he hurt you. If he wants back, you take him back. And for some strange reason, I think he’ll want to come home. And my guess is he will.

3. Someone Should Buy Brandon Jennings a Beer.

Today, David Stern bowed to pressure from millions of bandwagon NBA fans, and added Jeremy Lin to not just one, but two All Star events next weekend in Orlando. According to ESPN.com, Lin will be added to the roster pool for the Rising Stars game (replacing the Rookie-Sophomore game), with the teams to be picked by Shaq and Sir Charles (sigh). Not only that, but Lin will also participate in the Shooting Stars competition. And finally, dunk contest participant Iman Shumpert has indicated that Lin will play a role in his upcoming performance. So, worry not, Jeremy Lin supporter. Your man will be at All-Star weekend.

But, I implore you to think about Brandon Jennings. Really, world, how do you think Brandon Jennings feels right now? While Jeremy Lin was awarded with two All-Star weekend appearances for his efforts in six games, Brandon Jennings got bupkis for his efforts in 29 games. Brandon Jennings is averaging about 19 points, 5 assists, 4 rebounds, and 1.5 steals in about 35 minutes per game. He is the team’s leader in nearly every single statistical category, save for rebounds. And while his team has cooled off as of late, they are still 12-17, and within reach of the playoffs (provided Linsanity eventually cools down, and the Knicks start losing again). Brandon Jennings is one of the only reasons the Bucks resemble anything close to a competitive team. It really makes no sense that he’s not featured in some All Star event. Frankly, it makes no sense that he’s not an All Star, period.

So how does a player with six games of great basketball beat out someone with a full season of great basketball? Three words: major media market. Mavericks owner Mark Cuban was correct when he said that “if [Linsanity] was happening in Charlotte, no one would know.” The New York media has played as big of a role in creating Linsanity as the player himself, if not a greater role. Brandon Jennings, stuck in the hinterland of Milwaukee, has neither the visibility, nor the hype machine, that Lin has enjoyed the past two weeks. As a result, he’s staying at home next weekend, rather than trucking out to Orlando.Maybe that’s a plus for him, but I’m sure he was miffed that he didn’t get the nod.

In any case, I’d look forward to March 26, when the Bucks play the Knicks at MSG. Jennings always plays well against the Knicks, since they bypassed him in the 2009 draft for forward Jordan Hill. Now, as he stares at Jeremy Lin, who has already gotten more hype in six days than Jennings has gotten in three seasons, you’d better believe that he’ll be playing with more than a few chips on his shoulder.

(And I’ve never understood that phrase. Not one bit. Can anyone help me, here? Chips on my shoulders? I’d quickly brush that shit off. Effin’ chips.)

Jacob is a behaviorist by day, blogger by night, and founded the Diss. Follow him on Twitter @jacobjbg
View all posts by Jacob Greenberg →
This entry was posted in The Week That Was and tagged Brandon Jennings, Cleveland Cavaliers, LeBron James, Metta World Peace, Mike Brown. Bookmark the permalink.