The Peak of the Timberwolves Season Minnesota is known as the land of ice and snow. Cold winters and brutal blizzards that shut down entire cities for days. Cars with frozen candy shells. Temperatures below freezing that spoil any notion of spending time outside.

Those characterizations are fairly accurate. But being a Timberwolves fan in Minnesota (or really a fan of any Minnesota sports team) does not always feel like being in the cold of winter. It does not suggest the typical Minnesotan experience from October to April. No, we do not shield ourselves from the brutal reality of the world. We do not ignore the fact that we are the perpetual losers of the NBA. Instead, being a Timberwolves fan more closely resembles the experiences of those living in the deserts of Southwestern United States. You see, like the barren sands of Arizona and New Mexico, Timberwolves fans wander from mirage to mirage, clinging to the notion that there will be some soul-sustaining brook or life-saving reservoir just around the corner. Kevin Garnett was a mirage. A false promise of sustenance. Kevin Love appears to be the current illusion. No fault of his own, but someone who may potentially bolt when the opportunity comes up. Someone we hope can provide for us, but of course will not be able to shoulder the awesome burden that comes with the Timberwolves franchise. Because of this need for any hope at all, the NBA draft is the single most important occasion of the year for us. One that Timberwolves fans cling to. It is the kool-aid for our parched bodies. The one time where all rational thought and memory can truly be tossed to the wind. The one event where we can convince ourselves that this mirage we have once again stumbled upon, this time the water will be real and the thirst of our spirits can be quenched. Next season will be a success! We shall rise to the occasion and win 30 games next year (the thought!). 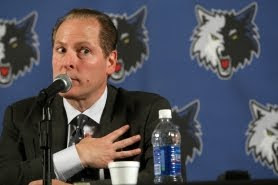 And David Kahn is our Moses. He is the current prophet that has led us to our supposed promised land. He is our Jim Jones, convincing us every offseason to drink the Flavor-Aid and to become excited about the next Timberwolves season. There are way too many parallels between the abusive relationships of lovers and how the Timberwolves franchise and its fans interact. But it is all we have.

So please, just for tonight, let me drink this sweet beverage. Let it leave a stain on my lips that I cannot wash away for weeks. Let me linger in the notion that we are going to trade our number two pick for a real shooting guard. Let the magic man David Kahn conjure up a trade to get rid of spare pieces (Jonny Flynn, Darko, Martell Webster, and maybe even Beasley) for a real, working center. Hey, it could happen! Because this night is for us. This night is dedicated to the entire Timberwolves fanbase clinging to irrational hope! Enjoy this, the most exciting night of the entire Wolves season!

*Just to note, I think we should keep the pick and draft Williams. I think Rubio will have a decent season and will have some flashes. A competent coach (assuming we hire one) will help us defend the three-ball and play a type of offense that works to our strengths. And we might actually be fun to watch. Shit, I knew I shouldnâ€™t have ordered that extra large kool-aid.

This entry was posted in General and tagged Minnesota Timberwolves. Bookmark the permalink.