Hi everyone, you may remember me.  My name is Terry Porter.  I was a solid point guard in the National Basketball Association for 17 seasons.  After I retired in 2002, I became a coach.  I was the head coach in Milwaukee for a minute, and in Phoenix for an even briefer minute.

Now I’m a time cadet.  And I travel through time. I know what y’all are thinking.  How did you become a time cadet, Terry Porter? That’s an unlikely career change. You know, that’s not really important.  Lots of weird things happen in life.  Tom and Katie got divorced.  Eddy Curry won a championship ring.  And Terry Porter?  Well, he travels through time.  That’s just what he does these days.

I’m here with a warning; a warning from the future. But this warning isn’t for your ears.  Nope, this warning is for my close friend and colleague Mike Brown, who currently coaches the Los Angeles Lakers:

Mike, your fat ass is about to get fired, regardless of how many games you win next season.

I’m sorry if that comes as a shock.  I can see why you think it would be.  I mean, you won 42 games  last year, and finished third in the West.  You won a tough opening around series against the Nuggets, despite calls for your head from the greatest point guard of All-Time (yes, even better than Terry Porter!).  And though you sorta got your ass handed to you by the Thunder, while everyone not named Kobe Byrant played like they were counting down the seconds until the start of summer break, almost everyone got their asses handed to them by the Thunder.  That Spurs dismantling (my former team!  What up, Mario Elie?) provided you with more security than you realize.

But let’s be serious Mike. If you think that all those votes of confidence were for real?  You’re kidding yourself, my X’s-and-O’s friend.  The future confirms this.  The first major challenge to your title just arrived, smiling like a snake, and carrying two MVP trophies with him.  I know you think you just received the greatest gift since that $50 gift certificate to Chili’s Dan Gilbert sent you.  But you know what, man?  Steve Nash is here to destroy you.  Steve Nash is here to send you back to the broadcasting booth (where you did a nice job, man; way better than me).  Steve Nash is here to ruin your fucking day. This may disrupt the time stream, but as my ace in the hole, I feel obligated to tell you what’s about to go down, so you can start preparing for the future present.  Or is it the present future?  Anyways, that’s not important.  What’s important is that things are not going to go as planned, and you’re going to be the fall man for it all.  And in the end, when it’s all over, and you’re ignoring the newspapers, and trying to get a few rounds of golf in, you’ll see one face in your mind: Steve Nash.

But enough about you for a minute.  Let’s talk about me.

Listen man, what Steve’s about to do — he did it to me too.  Remember when I got hired in Phoenix?  It was 2007.  They had just fired D’Antoni.  Said they needed to get tougher; instill a defensive mindset.  So they hired me.  Kind of strange, considering the Bucks teams I coached were 23rd and 28th in the league in defense, but who knows what chronic the Suns’ training staff was giving ol’ Stevie Kerr back then (and let me tell you Mike, that reknowned training staff in Phoenix: they aren’t giving the players ibuprofen to make them feel better, nawmsayin’?).  I guess I was an assistant with the Pistons.  Their defense was all right.  But in any case, they hired me to take the Suns to the next level. Defense wins championships, after all?  I would know, seeing as how I won all of zero championships during my career.  Like I said: Stevie loved that chron.  Loved that shit.

So I got to Phoenix, and there were all these guys who had played under Mike D’Antoni.  And say what you will about the lack of defense, and the lack of discipline, that came with 7 Seconds or Less.  Those guys loved Mike.  Grant, Amar’e, Dudley, J-Rich, even Shaq — all those guys were just Mike guys.  He never held them accountable; just designed the plays, instructed them to play within the confines of his confine-less system as much as possible, stroked his moustache.  Just fluffy shit.

And there was no bigger Mike guy than Steve.  Steve loved Mike.  And yeah, it made sense.  Mike and him rolled deep together. They arrived in Phoenix at around the same time, and experienced all that early success together.  Mike had won coach of the year with Steve, got hyped up as an offensive whizkid.  Nash was the most individually celebrated player since Jordan — a guy with an unflappably pleasant personality, who could just dazzle a room in so many different ways.  Those guys were meant for each other. And Kerr broke them up, and then set up Steve with me.

It was clear from the beginning that this wasn’t gonna work.  I was hired to instill a defensive mindset into a team that had purposefully ignored defense for the last five seasons.  I tried to build more offenses around Shaq and Amar’e (and hey, Stevie Kerr, what were you thinking on that one?); pound the ball down low and let the big me work in the post.  I tried to slow the team down a bit, give ourselves more second chance opportunities through a stricter half-court post game.   But not with Steve; not with these Suns.  Teaching a dog how to meow would’ve been easier than trying to get Steve and company to play a lick of defense.  So we failed.  We were allowing nearly 100 points a game.  It was absurd. 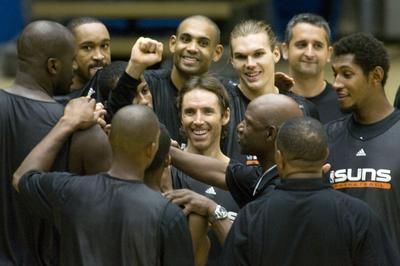 And yeah, people can talk all they want about me not knowing my personel.  They can talk about square pegs and round holes, about leading horses to water, about old dogs and new tricks.  But I’m gonna talk about calling a spade a spade.  Those guys didn’t try.  Didn’t try a lick for me.  There were some guys who are going to be Springfield, too.  Grant, Shaq, Steve.  May the Time Cadet union take away my membership card if those guys didn’t throw in the towel; throw me under the bus.  And when that bus hit me, with a 28-23 record, and one game out of eighth in a crazy competitive Western conference, I wasn’t surprised.  And I knew who was behind it all. 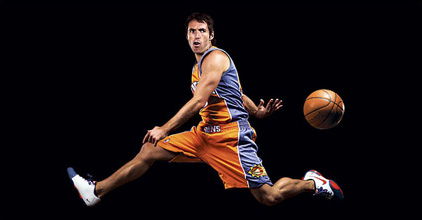 Mike Brown. Does any of this sound familiar?  Does anything I just told you ring a bell? An outsider trying to gain membership in an intensely insular and exclusive club, trying to get some old dogs to think his way about a new defensive system?  A roster filled with accomplished vets who have won lots, and lots, and lots of games together, under a extremely hyped coach, and his extremely hyped system?  And, most important, lead at the point guard position by Steve Nash?  Steve fucking Nash? Let me tell you what’s about to go down.  You are about to have a nice season.  You’re gonna put up a lot of points, and you’re gonna sell out a lot of games.  Your offense is going to be looking pretty nice, but the problem is it’s not gonna be your offense.  Sure, Steve is going to figure out a way to get those guys to get beyond the Triangle, and he’s probably going to get them to push Phil Jackson further from their minds than ever before.  He’s going to raise Bynum’s efficiency — get him to run around a bit, similar to what he did for Gortat and Shaq — and he and Pau are going to murder teams in the high pick and roll.  And when Kobe figures out that he’s not a souped up version of Steve Blake, those two are gonna have a field day on teams.  It’ll look awesome. But he’s not gonna clue you in on how to do it.  You’re not going to be invited, man.

And that defense?  That mindset you were hired to instill?  Well, that’s gonna go by the wayside.  It won’t matter because you’ll be winning games, and you won’t really be coaching the team anymore.  Steve Nash is not an elite defender.  He’s not even a competent defender.  But the thing is, he doesn’t need great defense to maximize his talents.  He needs great offenders.  He needs stallions.  So when you keep putting in Metta, despite the fact you really should be playing Ebanks, Steve’s gonna notice.  And when Steve notices something, you gotta look out.

The playoffs will go well enough.  You’re gonna go to the Western Conference Finals, but while the 25-year-old Thunder legs will be motivated and fresh, your 33-year-old legs will be tired and sore.  Kobe and Pau will be coming off of months of just playing basketball with no rest — Olympics, training camp, pre season, regular season, playoffs — and it will show.  Steve Nash will be brilliant, but it won’t be enough.  You’ll lose in six games.  Westbrook, Durant, Harden and a much improved Ibaka will destroy y’all.  And you’ll be shown the door.  And, to no one’s surprise, a certain mustachioed man — one who has the trust of both Steve and Kobe, and is currently unemployed — will take the fuck out of your dream job.

So be forewarned, Mike Brown.  The end is nigh.  Steve Nash is the Alpha and the Omega.  He is gonna get you.  And there’s nothing you can do about it.

And believe it or not, my shift isn’t over.  I gotta warn Liam Neeson about signing off on Battleship.

This is Time Cadet Terry Porter, reporting from the future.

Jacob is a behaviorist by day, blogger by night, and founded the Diss. Follow him on Twitter @jacobjbg
View all posts by Jacob Greenberg →
This entry was posted in General and tagged Mike Brown, Mike D'Antoni, Milwaukee Bucks, Phoenix Suns, Steve Nash, Terry Porter. Bookmark the permalink.

4 comments on “Time Cadet Terry Porter, Reporting from the Future.”