Into Western Conference Relevance: The Return of the Timberwolves

There is just something oh-so-perfect about the Timberwolves calling Minnesota home. The history of the Wolves has mostly been a comedy of errors, from drafting atrocious players to hiring terrible coaches and front office staff. Hopes have been traded along with lottery picks for horrendous wastes of space. Not to mention illegal player signings. We have never really had a chance to win anything of NBA importance in this state. The gloom and doom of the Timberwolves fits in nicely with the people that have traditionally populated much of Minnesota. After “settlers” came and stole the land from American Indian tribes, people from the Nordic countries of Norway, Sweden, Finland, and Denmark came to call this place home. We tend to be a cheerless bunch. Not much for excitement or passion. I am sure you have had to deal with us before. We don’t clap. We sure as hell don’t sing or go along with crowd chants. My own people, the Finns, drink four times as much coffee as the average American, and it seems reasonable to assume that they need all of this caffeine just to present themselves as being alive during the day.

Although the Kevin Garnett era was exciting, it really was the antithesis to how Nordic Minnesotans approach life. Way too thrilling and competitive. You could almost hear us release a sigh of relief after the Wolves lost in the Western Conference finals to the Lakers in 2004, proceeding to miss the playoffs the next year. The decay occurred rapidly after that. And it felt good to be home. So imagine my shock as I arrived to the Target Center last Saturday night for the Timberwolves’ preseason opener against the Milwaukee Bucks, only to find a relatively well-attended arena filled with an overflowing optimism and exhilaration. And it wasn’t the standard Lake Wobegon line that in Minnesota “all the women are strong, all the men are good looking, and all the professional sports teams are above average.” The crowd was into the game from the beginning, and absolutely erupted when Rubio made his first appearance. You could feel the energy in the Target Center surge to life, carried overtly by the screams of countless pairs of lungs, and secretly tapped out like Morse code along the anxious knees of over 15,000 fans. At one point in the game, Rubio lobbed a spectacular alley-oop to a wide-open Derrick Williams for a resounding slam. I couldn’t help myself. My arms shot up instantly as if in rollercoaster mode!

My Finnish great-grandfather would have been turning in his grave at the sight of my emotional response. But, this post isn’t about him. This post is about how the Timberwolves franchise has been dead ever since Garnett left, and how we are on the brink of a beautiful rebirth:

It was an atypical offseason for the entire NBA, but particularly for the Timberwolves. We fired the most sorry excuse of a head coach the NBA has ever seen. We went out and hired a legitimately great coach in Rick Adelman, someone that knows how to work with spare parts. After two years of courting our point guard querido (I just google translated that, hopefully it doesn’t mean anything offensive), the Spanish Savior has finally arrived on the shores of Lake Minnetonka. We made the correct decision in selecting Derrick Williams, and we even kept him! Not to mention random events like Kevin Love losing 120 pounds and Michael Beasley at least trying to play the straight man. Here are some quick notes on expectations for individual players.

Kevin Love: Looking slim and ready to rock-n-roll. His ridiculous rebounding skills are intact, as is his shooting touch. His post game has even improved. Hopefully his defense can take a step forward. Look for him to play a fair amount of center and to represent on the All-Star Team for the second year in a row.

Michael Beasley: This is a big year for him. He needs to show he can pass the ball when it is needed, can play a little bit of defense, and is willing to QUIT TAKING JUMPERS FROM TWO FEET INSIDE THE THREE-POINT LINE. I think he will have a good year, but not sure good enough to warrant keeping him around next season. Ricky Rubio: The crowd had a collective orgasm every time he touched the ball in the first preseason game. His ability to not only see the court, but also control the spacing and flow of the offense cannot be overstated. His shot will continue to struggle, but it won’t really matter. Rubio will be a godsend this year.

Derrick Williams: He has a lot of learning to do, and may not be as NBA-ready as scouts predicted. I expect him to have a relatively slow start, mostly coming off the bench at first, and only playing power forward. But, he has already shown some terrific flashes in limited minutes, and I expect him to be a reliable contributor by the 20 game mark. Perhaps a stud by the end of the year.

J.J. Barea: I enjoyed watching Barea in the playoffs last year, and figured some team would overpay for his services. I really didn’t expect that the overpaying team would be us. However, after watching the first preseason game it is evident that he is the second-best ball handler on a team that is in desperate need of them. I am excited to see him with Rubio on the court together, creating a lot of problems for the opposing defense. And he should be able to tie the team together nicely in a number of ways. He can speak some Spanish with Rubio. And he should be able to commiserate with Michael Beasley over the stupidity of Andrew Bynum. Asshole.

Darko: As long as Adelman doesn’t try to run the offense through him, he should be a serviceable big man that can play pretty solid defense and score the occasional bucket. Adelman should not let him be any more than that. And he won’t (sigh of relief).

Malcolm Lee: The second round pick has been a pleasant surprise for the team thus far. Look for him to be a solid backup shooting guard in his first year, and he will relegate Wes Johnson’s only minutes to small forward.

Once the season has settled in, I am hoping for a lineup of Rubio (PG), Barea (SG), Beasley (SF), Williams (PF), and Love (C), with Darko starting when real centers present themselves (and Williams sliding to the bench). Look for Lee to get some real playing time, perhaps at both PG and SG, and Anthony Tolliver to play some PF and C. Ridnour might also get some burn at PG (hopefully not much), and they will find some time for Wes to make it abundantly clear that he does not have a place on this team. 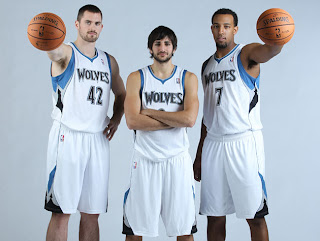 The Wolves will undoubtedly start out slow from the blocks, as they play Oklahoma City, Miami, Dallas, San Antonio, and Memphis in five of their first six games. But look for them to make some headway after that slate.

As much as I want to predict a playoff birth for my beloved Timberwolves, it probably isn’t in the cards this season. But with real guards, an intelligent coach, as well as adding solid talent in Derrick Williams, look for substantial improvement. My prediction for the Timberwolves season record is 30-36 (last year we won 21% of our games, this record would be 44% of the schedule), equaling eleventh in the Western Conference and fourth in the Northwest division.

That is right Minnesotans, we are traveling into a new realm. We are heading into Western Conference relevance. Be brave! Be bold!

This entry was posted in General and tagged Minnesota Timberwolves, Ricky Rubio. Bookmark the permalink.

2 Responses to Into Western Conference Relevance: The Return of the Timberwolves