Posted on February 22, 2012 by Hans Peterson
Editor’s Note: The Diss is proud to present a guest submission from Hans Peterson. This is Hans’ second contribution. I feel a bit conflicted about this one. On the one hand, I can’t imagine that there is anything left to say about Jeremy Lin at this point, and frankly, the hype is a bit exhausting (even if his emergence is the best thing to happen to The Diss this side of Jacob Greenberg’s facial hair). But on the other hand, I am only sick of reading OTHER people’s opinions on Lin, and there’s nothing I love more than telling others what I think about things, so here we go!

The good news is that I do think that I have a slightly different perspective on this than the current national dialogue, and one that is really more about the nature of the NBA than it is about Lin himself. One of the reasons I am particularly tired of “Linsanity” is that, as a student of NBA history, I just am not convinced it is real. It’s not that it isn’t a great story (it is), or that Lin hasn’t played very well (he has), or that I’m not rooting for him (I am). It is that there is a reason this story is so remarkable. It doesn’t happen in the NBA, and it is too soon to assume that it is happening now. 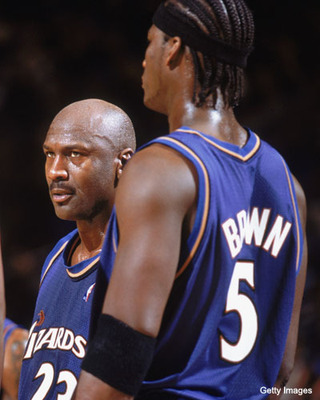 Scouting and drafting in sports in an imperfect science. Everyone loves to talk about how Tom Brady slipping to the sixth round because he was unathletic, or Pujols slipping to the 13th round because he was fat, or Kurt Warner getting picked up from the Arena League because his wife is really creepy-looking (or something like that). But it just does not happen in the NBA. There is great suspense in NBA drafting, but the suspense is which superhuman specimens with no basketball ability will become Dwight Howard and which will become Kwame Brown (if you are betting, don’t go with the one drafted by Michael Jordan, who may have finally surpassed Isiah Thomas as the person with the greatest disparity between his ability as an NBA player and his ability as an NBA executive). We don’t watch the NBA Draft to prognosticate which late second-rounders or D-Leaguers will become superstars. Because we already know the answer: none of them. Jeremy Lin went undrafted. We can consider the possibility that it was due to his race, or his college, or whatever. But regardless of the reason, no team drafted Lin. What does that mean in the context of NBA history? Well, I found this list, one of many claiming to name the 10 best undrafted NBA players of all time. You don’t need to read it, as it’s one of those annoying one picture-per-page websites. The highlights are that it’s a list of solid international players and above-average role players topped by the likes of John Starks and Ben Wallace. Ben Wallace was an unusual case. He became a prominent name in the NBA by using freakish athleticism, strength and hustle to be a premier defensive player in the league. But he had almost no basketball skills, and his act on worked on a team with four other strong defenders capable of putting up 20 points per game. When he took his show to Chicago and Cleveland, it became clear that his ability to be an elite player were pretty closely tied to specific circumstances.

But John Starks was legitimately great. For all you young kids out there, he did this.

So let’s say John Starks is the best undrafted NBA player ever. If Jeremy Lin spits in the face of history and defies all odds, he could be as good as John Starks. As great as John Starks was, he played in one All-Star game. He was never a top ten player in the NBA. So far, Lin has looked like Derrick Rose. In the NBA, undrafted players don’t just become Derrick Rose. Only Derrick Rose, number one draft pick and heralded star tracked from high school, becomes Derrick Rose. Let’s look at the top ten-ish players in the NBA. LeBron, Kobe, Wade, Dirk, Durant, Rose, Dwight, CP3, and whatever combination of Love, Westbrook, Griffin, Melo, Deron, etc., that you prefer. How many of those players would have been considered enormous longshots on draft day to be the NBA’s elite? I’m going to say none, given that they were all drafted in the first half of the first round.

Go back in time. Even the weirdest of top players in history were drafted relatively high. Scottie Pippen was a walk-on at the University of Central Arkansas. He was drafted fifth. Steve Nash was a long-haired white Canadian from Santa Clara University. He was drafted 15th. And this was before the age of unlimited internet information/video/etc. The basketball world is simply too small, the media coverage too ubiquitous, and the players on the court too few for the most elite talent to drift through the system unnoticed. The good news is that Jeremy Lin certainly appears to be a meaningful and useful NBA player. He might even be John Starks. But he’s not an All-Star starter, and he’s not going to single handedly lead the Knicks to the promised land. Granted, historical precedent alone is not “proof.” It is certainly persuasive, but Lin could be one in a billion cases that has never been seen before. But it is FAR too early to decide. Basketball players get hot. For my first witness, I call the few, despondent Timberwolves fans from 2009. They may remember the fervor surrounding their then-savior: Randy Foye. I present Exhibit A for your consideration. Now take a glace at December 20 to January 13 of that page. A truly hopeless Wolves team won seven out of 11 games during that period, including a five game winning streak. All on the backs of their Allen Iverson-clone version of Randy Foye, who averaged 20-5-5 while shooting over 50% from the field. As we all know, that led to Randy Foye’s permanent establishment as the next great NBA combo-guard. Oh, wait. No. It led to his role as a bench-warming role player for the Clippers.

But to be fair, that wasn’t Foye’s first significant introduction to the NBA, right? Lin is already dominant. Won’t he only get better? Well I’m glad you asked! From the 2010 season, another Midwestern scoring point guard broke and took the NBA by storm, but this time it was a rookie. I present Exhibit B for your consideration. From November 11, 2009 to November 21, 2009, the sixth through 11th games of his career, rookie Brandon Jennings led a pretty mediocre Bucks squad to five wins in six games while scoring 30ish points a game, alongside 5 assists and 50% shooting. And when he put up 55 points, he didn’t do it against Derek Fisher. Because while not just anyone drops 38 in an NBA game, when they do, it’s most likely going to be against a player who defends like this:

Shortly after his explosive debut month, Jennings’ shooting percentage plummeted and he became an occasionally prolific, if inefficient, scorer — certainly worthy of a starting role on a mid-level NBA squad, but unlikely to orchestrate championship teams.

Not all of this means Lin will regress. He could continue to be the most unlikely success story in NBA history. But it is not the most likely scenario. Odds are “Linsanity” is not going to be a long-term part of the NBA lexicon. I do think he’ll be in the league long term. I’m delighted he is never going to have to sleep on someone’s couch again and I hope he has a ten-year career. He could follow the Brandon Jennings path and be a top-three player on an above-average team. But for all the gamblers out there, I don’t htink I would place bets on Lin’s future All-NBA Team prospects.

I love a good underdog as much as the next guy. But for all I love about the NBA, it isn’t an underdog’s league. Historically, the best players have been the best players since they were high schoolers making appearances in Sports Illustrated. In my middle school years, my favorite players were Scottie Pippen and Muggsy Bogues. I loved Muggsy because he was the only NBA player shorter than me (at the time), and I loved the idea of someone shorter than me taking on the giants, even if he did it with superhuman quad muscles whose speed made him look like he was using an NBA Jam cheat code. But Muggsy was never expected to be Derrick Rose. He was never expected to make the All-Star team after 7 games, or have the top-selling jersey in the NBA (although I do still have a Bogues Charlotte Hornets jersey and it is every bit as awesome as you would imagine). So I guess I hope we can all root for Lin as the underdog who made it big, but without putting the kind of expectations on him that are currently raining down from every basketball blog and podcast in the country. Because I don’t want to be disappointed when he becomes an 11 point, 7 assist per game point guard for a playoff team. That should be cause for celebreation, but I fear that the Linsanity madness will make it a failure.

That, or, y’know, maybe I’m just bitter that Lin (and Rubio’s increasingly Rondo-esque jumpshot) has stolen all the attention from Rubiomania.