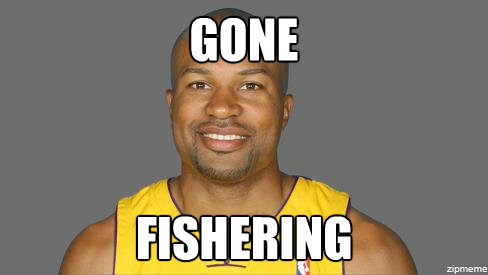 Many years back, TNT’s Kenny Smith coined and popularized the phrase “Gone Fishin’” to refer to teams that had been eliminated from title contention, either due to regular season results or playoff defeats.  It makes me wonder: which NBA players actually go fishing when they have the opportunity to do so?  My trusty research assistant, Google, put in 0.46 seconds of work, and delivered 6,000,124 results.  I weeded through every single one to offer you the NBA’s fishermen: Brad Miller, Chris Kaman, Carmelo Anthony, Jeremy Lin and Monty Williams.  So there you go.

We’re still trying to keep up with our non-playoff friends, so on tap for this week: mixed messages in Portland, not-so-mixed messages in Sacramento, and the $4 million dollar job in Charlotte that no one seems to want.  Let’s get to it!


Oregonian sports columnist John Canzano and Portland Trailblazers owner Paul Allen have something of a contentious relationship.  This isn’t surprising; Canzano is the lead writer covering the Blazers, and Allen is the franchise’s chief benefactor and primary decision maker.  The two have come to loggerheads several times, including a kerfuffle this season which saw Allen attempt to use some recent vacation pictures to construct a Reddit-esque diss meme after Canzano wrote a pointed article asking Allen if he “was in or out”.  Most people gave Allen a solid “B” for effort.

This weekend, the Oregonian published another pointed critique of Allen, written by — who else? — Canzano.  In this edition of their deepening internet war (since the occasionally reclusive Paul Allen rarely grants face-to-face interviews with any media members), Canzano details a shady business meeting he was invited to attend.  At the meeting, Canzano shared the table with “people so influential and well placed they’re typically busy getting initiatives passed and politicians elected” (well, then!).  These Portland elites let it be known that they believe Paul Allen has secretly put the Blazers up for sale.  Moreover, these Portland elites seem to think that the next owner is going to be Merritt Paulson, the popular current owner of the Portland Timbers (the city’s MLS team), a former underling of David Stern, and the son of a former Secretary of the US Treasury.  Canzano brashly issues these assertions, despite the fact that (1) Paul Allen released an open letter earlier this week in which he expressly and clearly states that the team is not for sale, and (2) Merritt Paulson, himself, in the article, denies any interest in wanting to purchase a majority stake in the Blazers, either now or in the future.  Nevertheless, Canzano sticks to his guns, and asserts that the Blazers will be going on the market, and that Paul Allen has had enough of the NBA.  Neither Allen, nor his for-hire band of internet-tough-octopuses (octopi?) have commented on the story.

Stuff like this makes me wonder what Canzano (and other “Me Versus the Owner” columnists like the San Jose Mercury‘s Tim Kawakami) actually get out of this. Do the leading sports columnists for major media outlets actually think about their assignments critically, or just try to write something that will get a rise out of their readers.  Yes, the Blazers had a disappointing season.  They have not lived up to the lofty expectations others had for them.  But Paul Allen did not take baseball bats to the knees of his former franchise players.  And true, he has yet to hire a general manager, and has let his former GMs go under shady circumstances.  But a number of inalienable truths remain.  Truths like this: Paul Allen still has billions of dollars in the bank and that he’s currently involved in the hiring of a new general manager.  The Blazers have both cap space and draft picks to use.  And in the end, they finished 28-38, were in playoff contention for most of the season, and have a roster needs tweaks rather than wholesale changes Canzano insists upon.  And included in those superfluous wholesale changes?  That’s right.  Selling the team to a popular owner in the Portland era.  Paul Allen’s got his issues.  But owning the team isn’t one of them.

So John?  Take it from someone who had to endure two decades of Chris Cohan: it could be worse.  Much worse. While we’re on the subject of embattled owners, we should check in on the mess in Sacramento, where the city of Sacramento continues to battle with Kings’ owners, Joe and Gavin Maloof.  Hey, friends!  How you guys doing down there?  Getting your stuff worked out with that pesky arena-and-not relocating-to-Anaheim-or-Seattle thing?

Oh, City of Sacramento, I see you’ve gathered all the influential business leaders in the arena, and written a letter to David Stern!  That’s thoughtful of you, I’m sure he loves getting letters.  What’s it say?  Oh.  It says that you think “it is time for the Maloofs to sell their ownership of the franchise, for the good of the city and in the interest of advancing Sacramento’s effort to build a downtown arena.”  You add that “the city, the fans and the NBA deserve and require an ownership group that is fully committed to being a good-faith constructive participant in the arena process,” and that “the Sacramento community has lost faith in the Maloof family’s ability to deliver on the many promises it has made.”  And you all signed it with a nice looking ball point pen.  Okay then!

Well, Joe and Gavin, what do you gotta say?  This must seem a little hostile, but you guys are businessmen.  I’m sure you’ll handle this professionally; work with these guys.  After all, if you actually want to stay in Sacramento, you’ll have to keep these businessmen somewhat on your good side, right? Can’t bite the hand that feeds you, y’know?

Oh.  You’ve hired a private eye to see if any of these signatures were forged.  And this guy’s making home calls?  Like, invading privacy and shit?  Waiting outside in his car, binoculars in hand?


Last week we bid farewell to Paul Silas, whose suffered through a 7-59 season as the head coach of the Charlotte Bobcats.  Since then, Bobcats owner Michael Jordan, president Rod Thorn and general manager Rich Cho have been sifting through resumes, attempting to locate the man who will take Gerald Henderson, Byron Mullens and Kemba Walker to the promised land.  But — surprise, surprise! — no one seems that interested in coaching a team bereft of talent and marketability.

A few interesting names have popped up — younger faces who haven’t been interviewed for many head coaching positions.  Most reports indicate that the Bobcats would prefer to hire Mike Malone, who served as rookie head coach Mark Jackson’s lead assistant in Golden State.  Malone was moderately sought after last season, interviewing for head coaching vacancies in Houston and Detroit, as well as an assistant position with the Lakers.  According to Tim Kawakami, Malone chose the Warriors job because he felt it represented his best chance to land a top-shelf coaching position later on.  TK makes an excellent point when he asserts that Malone will be in a better position to choose a position next season, when the Warriors are either winners (thanks, presumably, to his coaching of the players, and his mentoring of Mark Jackson), or something, at some point, goes horribly awry, and he suddenly finds himself in a position to be promoted to head coach.  As such, Malone has been reluctant to express too much interest over a job that might be best served for a less marketable candidate?

So who are these candidates?  A number of largely unknown assistants have been mentioned — some guy named David Joerger in Memphis, a certain Nate Tibbitts in Cleveland, and, of course, Stephen Silas, the lead assistant in Charlotte this season, and son of former coach Paul Silas.  A few favorites, like Pacers associate head coach Brian Shaw, have made appearances.  But the flavor of the week pick is Patrick Ewing, Hall of Fame player and longtime assistant coach who has been credited with the developments of Yao Ming and Dwight Howard (though don’t you dare typecast him as a big man’s coach, he doesn’t appreciate your shortsightedness).  Ewing has openly campaigned for a head coaching job for quite a few seasons now, and perhaps it’s time to give him a shot, especially if the Bobs land big man Anthony Davis with the first pick.

My money’s on Stephen Silas getting the job, but I’d love to see Patrick get a shot at it.

Jacob is a behaviorist by day, blogger by night, and founded the Diss. Follow him on Twitter @jacobjbg
View all posts by Jacob Greenberg →
This entry was posted in The Week That Was and tagged Maloof Brothers, Paul Allen, Portland Trail Blazers, Sacramento Kings. Bookmark the permalink.