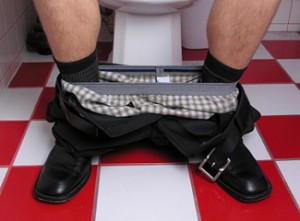 We hope this finds you well, wherever you may be pooping.

While many sites offer mock drafts (including this one; stay tuned), the guys at HP do this one right.  This is an extremely useful resource if your knowledge of particular team needs or the actual players themselves is not completely up to snuff.  It’s also a very funny and informative piece, and extremely well researched.  Another great post from HP.

Stephen Jackson is one of the NBA’s more controversial players, and just the kind of guy we like over here at The Diss.  I mean, what’s not to love about the guy that “makes love to pressure”?  Besides the whole going into the crowd in Detroit or shooting a gun outside of a strip club incidents, that is?  Jackson has simultaneously played the architect of success and the archangel of destruction in four NBA locales (Indiana, Golden State, Charlotte and Milwaukee) before returning to his beloved San  Antonio Spurs.  Abrams goes back thirty years to the seeming hellhole that is Port Arthur, Texas, in an attempt to understand how the polarizing man (that went 6-7 on three-pointers in San Antonio’s game 6 loss a couple nights ago) came to be, and leaves even those that have followed Jackson’s career closely with a newfound respect for the man.

- FM
“The Four Year Post”
Chunkstyle 23
Supersonic Soul
Supersonic Soul is one of the last remaining Seattle Sonics blogs that produces new content on a regular basis.  In general, this blog provides important insights not only into the events which ended the Sonics, but also how displaced Sonics fans have coped in the four seasons since the team relocated to Oklahoma City. In this post, written in the hours after the Thunder won the Western Conference, the blogger lays out a six point plan for Thunder fans from here on out: (1) let go of Sonics history, (2) accept that Sonics fans will hate the Thunder until they get a team back, (3) save comments about the Sonics for their own blogs, (4) drop the idea that a lack of fan support in Seattle was the main reason for the franchise’s relocation, (5) never expect Seattleites to root for the Thunder, and (6) “realize there’s a difference between ‘getting over it’ and ‘moving on’”.  The author provides excellent points, and biting, but fair insights into the fragile state of the Sonics nation.
- JG
“At Least There’s No TMZ Sports”
David Roth
The Classical
The NBA features more crossover stars than any other league, so it comes as no surprise that TMZ, Harvey Levin’s slimy paparazzi operation, focuses somewhat heavily on the Association.  What does come as a surprise, however, is that TMZ occasionally breaks important sports news.  The Tiger Woods scandal was first reported by TMZ, and it represents their biggest coup to date.  As a result, TMZ owns the domain for TMZsports.com, which to date has never been launched.  In this open-ended piece, Roth hypothesizes about what TMZsports might look like, and the effect it would have on the mainstream media.   Roth fears the mix of paparazzi and mainstream sports, and what would be constituted as “news” in a TMZ-dominated landscape.
- JG
“Franchises Headed in Opposite Directions”
John Hollinger
ESPN (Insider)
The Clippers just had the best year in the history of their franchise.  They advanced to the second round of the playoffs, have a budding superstar in Blake Griffin and a bona fide superstar in Chris Paul, and are seemingly turning Los Angeles into a two-team town.  But not so fast, there is still a major limiting factor: owner Donald Sterling.  Hollinger explains how the loss of former Clippers GM Neil Olshey to Portland is a boon for the Blazers, and why it should be a big cause for concern in Tinseltown.  Both Griffin and Paul come up for contract extensions soon, and a long-term decision needs to be made on the fate of coach Vinny Del Negro.  With the loss of Olshey, it isn’t clear the Clippers have anyone able to competently make those decisions.
- FM
This entry was posted in Annotated Bathroom Smartphone Reader and tagged Los Angeles Clippers, NBA Draft, Portland Trail Blazers, Stephen Jackson. Bookmark the permalink.