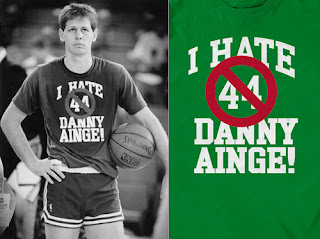 Let‚Äôs just get this out of the way. I‚Äôve been a Celtics fan since the days of Dino Radja. At a young age, I got overly excited by players like Dana Barros and Andrew DeClerq because I thought their names sounded cool. Although I became infatuated with teams like the 1999 Knicks and the 2000 Pacers (thanks for not having cable TV, mom and dad!), the Celtics always held it down, and for good reasons - I didn‚Äôt want all the kids at school making fun of me for being a Ewing or Miller fan…

With that said, I‚Äôm a diehard Celtics optimist, and you‚Äôll find me firmly entrenched in the Celtics could have made the Finals with a 80% Avery Bradley in their rotation against the Heat¬Ýcamp. Oh well, too bad. Congrats LeBron, D-Wade, and Bosh - if Kevin Garnett re-signs with the Celtics (god willing), you‚Äôre going to have to deal with him barking and unleashing tirades of profanity at you for a few more years. He might have to use a cane on off days by the end of the 2013-2014 season, but that won‚Äôt stop him from running his mouth, so get ready Miami, or as we used to say in 2004 in Boston - Cowboy Up!

So, while Skip Baylesses and Stephen A Smith‚Äôs of the country decry the 2012-2013 Celtics as “too old to win anything, ever again,” I‚Äôm much more optimistic. Re-sign KG. Put Paul Pierce on a strict off-season physical therapy regimen, and bring in a few veterans who can defend the wing and shoot the three ball. Also, Jeff Green? Chris Wilcox? The Stiem Engine? Pietrus? Cap Space? The return of Ray Allen could be the gravy on top, although he looked relatively washed up in the 2012 Playoffs - albeit with bone spurs in his ankle. Just please don‚Äôt go to Miami Ray, please!?

What do the Celtics need to do in the draft? Well, with picks #21 and #22 in the first round, everybody‚Äôs favorite Mormon GM has some ammunition to potentially move up (according to Woj, he‚Äôs trying), down, and around the draft if he so desires. Remember, it was a draft day deal for Ray Allen that started the Big 3 era. If the Celtics keep both picks, they need depth at the 2-4 positions. Players liks PJ3,¬Ý Fab Melo, free falling Jared Sullinger, Andrew Nicholson could be considered, although I seriously doubt Danny is staying put with 21 and 22 in such a “deep” draft. WHAT IF THEY MOVED UP TO THE LOTTERY?

A Rondo-MKG backcourt with KG in the lane on defense? I‚Äôm starting to salivate.