The Pitfalls of Liberation. One of FreeDarko’s most salient points, and an idea that we focused heavily on during FreeDarko week, was the concept of liberated fandom, which privileges individualism, style and watchability over institutional and geographic allegiances.  The articulation of this concept was (retroactively) important for me since it allowed me to explain why, during high school, I became a rabid fan of competent and watchable teams like the Spurs or the Kings come March (or more specifically, the players on those teams) while “my” team, the Golden State Warriors, toiled in a perpetual state of mediocrity and anonymity.  It was as if I had entered a secret code into a video game, and suddenly all of the characters and levels were unlocked.  After coming out as a liberated fan, I could follow, study and admire individual players regardless of their (or my) obligations to another city or fan base.  Fandom had become diffuse, and I was happy to bask in the post-structurelessness of it all.

One of the players I developed a real crush on while I lolled in the most liberated period of my liberated fanhood was Steve Nash.  I first became enamored with him while he was beginning to realize his potential with the Mavericks (after a period of being labeled as a “bust” in Phoenix; a period of misanalysis that is rarely discussed), who themselves were beginning to realize their potential as perennial players in the Western Conference.  At the time, Steve Nash seemed like the lovable little brother in a rising trio that featured himself, Dirk Nowitzki and Michael Finley.  I enjoyed watching him zip around the court, his hair flying behind him, delivering off-balance threes with a distinctive fallaway shot that came straight from his elbow, or hurling pinpoint passes to his two fellow stars, or even his many quality teammates (I really liked the 2003-2004 team which featured Antoine Walker and Antawn Jamison, an all-time favorite former-Warrior who won the Sixth Man award that year).  In my 17 year old NBA worldview, there were two styles that defined the White point guard: the John Stockton, a gestapo-like style that adhered to cold, calculated efficiency, and the Steve Nash, a warmer and more enigmatic style that embraced the fun of the game, and made everyone around him into a more aerodynamic (and seemingly more motivated) version of their former selves.  I greatly preferred the Nash.  Before long, everyone did.

When he went to Phoenix in 2005, and took his game to a new level, he took my fanhood of him to a new level as well.  No longer was Steve Nash just a top-shelf point guard who you’d casually include in a casual “which Steve would you rather have, Steve Nash or Steve Francis?” query.  Now he was a two-time MVP and rapidly ascending to the Magic-Isiah-Stockton-Cousy level, that “best point guards of all time” level.  It felt like I was looking at the guy who used to be my quirky, nerdy friend, who went away to his grandparents’ all summer, and came back four inches taller, 20 pounds lighter, and was suddenly getting all the girls while still maintaining his awesome quirkiness and not letting any of his new found popularity go to his head.  His Suns team was revolutionizing the way teams played basketball, revolutionizing the ways we watched basketball, and even revolutionizing the way people talked basketball.  No really, they did.  Because of Steve Nash, and SSOL’s esoteric exuberance (in particular, the brilliant play of Leandro Barbosa) FreeDarko found a subject of analysis to aid in its rise to prominence.  Because of Steve Nash, Joe Johnson, Amar’e Stoudemire, Boris Diaw, and Shawn Marion all got to pad their career stats, and were all paid handsomely.  Because of Steve Nash, Mike D’Antoni became known as an offensive wizard, and scored sweet jobs with the Knicks and USA Basketball.  Because of Steve Nash, Grant Hill, Tim Thomas and Shaquille O’Neal received a new leases on life.  Because of Steve Nash, Phoenix was a contender; one of the big boys.  For a long time there, it didn’t seem like it was a matter of if the Suns style of bombastic, liberated play would net Phoenix, and its most famous resident Steve Nash, a championship.  Rather, it seemed like a matter of when.

But things didn’t work out; we know this now.  Otherwise, we wouldn’t be where we are today.  But if Steve Nash was disappointed about the way things were going towards the end, we wouldn’t have known. Steve Nash took elbows to the face from Robert Horry, and took an ill-timed suspension from David Stern, largely in stride. And even in the wake of that improbable, bittersweet run to the 2010 Western Conference Finals — Steve and Amar’e's last stand in the defense of SSOL’s efficacy — Nash seemed sad, but ultimately accepting of his team’s six game defeat.  Indeed, Nash’s ability to accept what the Suns had become since he signed a two year, $20 million dollar deal after that 2010 run was the major theme of the previous two seasons.  The Suns continued along a fairly respectable path because Steve Nash could accept. Accept that Amar’e was going to walk because Robert Sarver was a cheapskate, accept that they would spend the equivalent of a max contract for the services of Hakim Warrick, Hedo Turkoglu and Josh Childress, accept that his best teammates were going to be Marcin Gortat, Jared Dudley and Grant Hill, accept that it just wasn’t going to work out as planned.  He learned to accept, until his contract ended, and he didn’t have to accept it anymore. The hardest part about this whole new arrangement is that, from the perspective of a liberated fan, there might not have been a better fit for Nash than the Los Angeles Lakers.  None of the presumed landing spots for Nash seemed like a particularly good fit for either Steve Nash the basketball player, or the liberated fans of Steve Nash the basketball player.  The incomprehensibly ignorant (and distinctly American) assertion that Steve Nash, who hails from Victoria in British Columbia would choose to play for the rebuilding Toronto Raptors simply because its Canada never seemed to have any legitimacy (probably because it seemed too boneheaded and nativist).  Similarly, the Portland Trail Blazers, who are also in full-fledged rebuild mode under new general manager Neil Olshey, didn’t seem like a particularly good or natural fit for the final years of Nash’s career.  The New York Knicks, who are trying every avenue possible to build a good team (except, you know, draft the right players, develop the right talent, make the right trades and sign free agents that they intend to actually use), didn’t deserve the services of Steve Nash.  And even the Mavericks, who are quickly finding themselves in a swelling creek of shit with nary a paddle in sight, wouldn’t have benefitted greatly from the play of the still spectacular but unquestionably diminished point guard.  Sure, he would’ve helped.  But he wouldn’t have been the piece to make up for everything Chandler, Barea and Kidd provided.

No, Steve Nash is now a Laker.  And as hard as it is to admit, the Lakers provided everything a liberated fan of Steve Nash would want to see.  Steve Nash joins an already established group of veterans who have played together for a number of years, and who have the talent to go to the finals.  And even though Nash’s presence doesn’t guarantee that the Lakers will be any more brilliant offensively, it doesn’t seem likely that he’s going to hurt.  Ramon Sessions provided a brief, imperfect glimpse of what a true point guard can do for the Lakers in a Mike Brown system.  I’d expect Nash to do an exponentially better job than Sessions did as Mike Brown’s quarterback.

And as a liberated fan of Nash, I would be lying if I wasn’t interested in what his presence did for the culture of the Lakers, who have existed rather uneasily in the Kobe dynasty since 2004.  Kobe hasn’t had a teammate with as much gravitas as Nash since Shaq — Nash is a two-time MVP, and eliminated Kobe from the playoffs three years in a row. Though he has made great strides in recent years, Kobe still has had a hard time ceding control, and his occasionally selfish play can be detrimental towards the chemistry and composition of the Lakers.  At the same time, Lakers players occasionally grow wary of Kobe’s moodiness, and perhaps fail to play their hardest to spite him.  Having a player of Nash’s caliber provides the first ever “Good Cop” figure who can stand alongside Kobe, and whose leadership will be taken seriously.  Bynum cannot fill that role, and Pau chooses not to.  Steve Nash may help the Lakers play and seem more like those lovable Suns of the mid 2000s.  And maybe he’ll make Kobe seem more warm and fuzzy.

Steve Nash provides the Lakers a chance to add scores of liberated fans to their vibrant but maligned army.  Our love was never with the Phoenix Suns, the laboratory where the Steve Nash we marvel at today was perfected.  Phoenix could’ve been Dallas, or Milwaukee, or New Jersey, or even Vancouver (could Nash have saved professional basketball in British Columbia?).  It would’ve happened somewhere, and we all would’ve marveled at what Steve Nash was able to become at a fairly advanced state in his career.  But it happened in Phoenix, with Mike D’Antoni, Alvin Gentry and Amar’e Stoudemire, and it was a lot of fun while it lasted.  And now, those who loved those times, and loved the man who made the whole SSOL party possible, will appreciate him in a new way as he helps soften the influence of Kobe, reinvents Pau, and hopefully raises the production (and calms the minds) of Metta World Peace and Andrew Bynum.  The Lakers are getting a great chance at a makeover, and have been assigned a stylist who will change the way we think about them, institutionally and individually. And, as LeVar Burton would assure us, you don’t have to take my word for it.  Even the non-liberated fans are on board.  As I was writing this piece in a coffee shop in Seattle, a guy with a Suns Nash jersey walked in and sat down.  After awhile, I approached him, explained that I was an NBA blogger (eliciting a snort from a lady behind me), and asked if I could take his picture.  He agreed.  I asked him what he thought about the trade, and if he was a Suns fan.  He said he was (he was from the Phoenix area), and on the trade…well, he had given it a shot in Phoenix.  He had given them just about all he could give, and now it was time to focus on winning one before all was said and done.  True enough.  But the Lakers?  A tough pill to swallow, but it provided a good chance to win a championship, so — so be it. 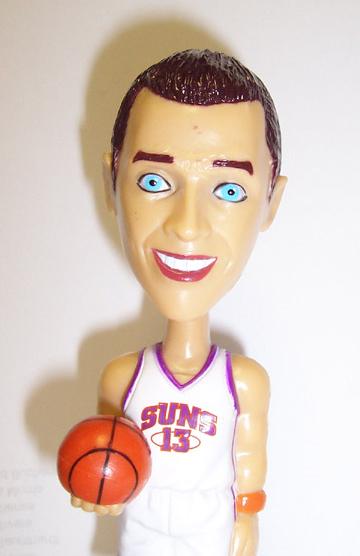 And that’s how it should be.  In an NBA where individuality is championed, and windows of opportunity are short, we cannot dwell on this too much longer.  As liberated fans, we must look at this as a chance to reinvent and add new works of art to an already impressive portfolio, even if the work comes with a franchise that occasionally deserves our disdain.  But even that franchise is imperfect.  Even that franchise needs a makeover.  This is a good fit.  And that’s just how it is.

Liberation, it seems, is a blessing, and a curse. Jacob is a behaviorist by day, blogger by night, and founded the Diss. Follow him on Twitter @jacobjbg
View all posts by Jacob Greenberg →
This entry was posted in General and tagged Liberated Fandom, Los Angeles Lakers, Phoenix Suns, Steve Nash. Bookmark the permalink.

5 comments on “The Pitfalls of Liberation.”