Editor’s Note:  Over the next three days, we will be discussing race and professional basketball, with a special emphasis on the problematic nature of the predominantly white Minnesota Timberwolves.  This guest piece by Andrew “Frenchie” French bravely leads of our coverage.

My indelible memory of Frenchie is from Summer 2004.  Former president and conservative ideologue Ronald Reagan had just died, and his state funeral was on TV. I came into the lounge of our dorm room floor to see Andy watching television, sipping a Coors Light, and apologetically weeping in front of the television, happy that The Gipper was in a better place.  I was stunned.   Since then, Mr. French has been the lone conservative voice on my Facebook wall, staunchly standing up to Obama supporters, pinkos and communists with a brashness and sharpness that could only be developed by years on the Iron Range, as well as many years of living amongst tree-hugging hippies (like yours truly). Mr. French is a banker, hunter, husband, father, and living proof that a white, conservative slack-jawed yokel and a dashing, black young radical can look past politics, and remain good friends for years on end.  I am very fortunate to have a friend like Frenchie.

Look for a special roundtable on race and the Wolves tomorrow, as well as my response to the piece you are about to read on Thursday.  Simply put, if you write off Frenchie’s thoughts on the Timberwolves as racist, I challenge you to think harder. I’ve lived in Minnesota for every passive aggressive minute of my thirty one years, and every stereotype of the Land of Ten Thousand Lakes is bogus. Sure, we have our lutefisk (never tried it), and our potlucks (butter on a bologna sandwich is horrendous), but I don’t think that Hollywood fodder is a true representation of my homeland. No sir…as a red stater stuck in a blue state that at times is described as “purple” (keep dreaming, Fox News), I can attest to the fact that Minnesota is nothing like rest of the country believes.

As I embody a fairly accurate representation of our demographics (Swedish, Irish, German and Finnish), I am extremely well qualified to comment on the other five million residents of the Gopher State. Well, maybe not all five million, because I can’t really begin to understand the experiences of the Hmongs or Somails that live in Minneapolis and St. Paul, or the elitist snobs that live in any of the thousand (or so) cookie cutter suburbs that surround our beloved Twin Cities. Come to think of it, I can’t really relate to the doctors in Rochester at the Mayo Clinic, or the Hispanics that pack meat in Willmar, or the farmers in the river valleys, or the smart ass college kids in Northfield, Mankato or St. Peter.

I guess I represent a fairly small sample size of North Stars that reside in small pockets all around the state, mostly forgotten by the rest of the world, content to go about our business and spend our free time in a deer stand, ice house or duck blind. We don’t ask for much beyond a cold Busch Light or a pinch of snuff if our tin is empty. We prefer to be left alone, whether by law enforcement or the local conservation officer. We have our opinions (not that they’re any of your business), and we prefer that you keep yours to yourself. Hockey is the sport of choice around here, but thanks to greedy players and greedier owners, there isn’t much of that to watch these days. What, then, are we left with to pass our time during the long, dark and cold winter nights? Basketball.

There’s nothing inherently wrong with the sport. It makes sense: you have a round ball and a round rim, and the goal is to put the former through the latter. I get that. You’ve got dunks and threes and fast breaks, and there are some incredibly gifted athletes on the court no matter which team you’re watching. Minnesota has a tremendous basketball history, dating back to the days of George Mikan and the Minneapolis Lakers, and if Minnesotans are good at anything, it’s remembering important white people. Unfortunately, we have been stuck with the Timberwolves as our team d’etat. I can remember the first season when they played to massive crowds in the gleaming white Metrodome, lead by Sam Mitchell, Pooh Richardson and Tyrone Corbin. The hoop dreams of a basketball starved state resting in the hands of giants.   But alas, the T’Wolves were garbage, and stumbled through mediocre season after mediocre season until the teenager from Farragut Academy arrived to deliver us.   Yet, despite some playoff success, there was no championship. No ticker tape parade down Marquette Avenue. No billboards displaying our undying love and devotion to the starting five. Then brighter lights called and KG left for Hahvad Fucking Yahd, and NBA anonymity called again. 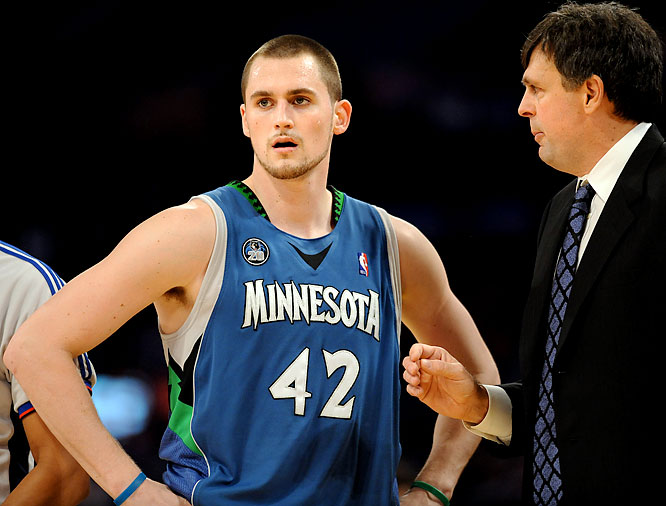 I will freely admit that basketball is not my favorite sport. I would much rather watch football or baseball or hockey if the schedule allows.   However, the day Kevin Love showed up, something changed. At first, it was by accident. Flipping through the DirecTv guide, in between Iron Chef reruns and the Law and Order of the day, I saw the T’Wolves on Fox Sports North. “What the hell,” I said to myself, and then I was enthralled by the chubby white kid from UCLA, banging bodies with the taller, stronger and more vertically inclined members of the Phoenix Suns. Who did this guy think he was with his buzz cut and goatee? His thirst for rebounds and apparent disdain for outward displays of emotion? Now this; this is someone I could relate to!

I don’t consider myself a racist. I have a college degree from a liberal arts school, and I didn’t major in anything related to agriculture or bass fishing. I have black friends (their names are Dale and Jacob). My stepdaughter’s boyfriend is even 1/16 Ojibwe. That being said, there is something extremely gratifying about watching a white guy succeed in the NBA. Go ahead, call me a bigot. Or send me a white sheet and tell me to enjoy the next Klan meeting. I know it sounds awful, but I don’t care. This summer, when David Kahn proceeded to sign Kirilenko, Shved, Stiemsma, Amundson and Budinger to go with Love, Pekovic, Ridnour and Rubio to create the whitest roster since an Adolph Rupp coached team had taken the court, I was even more excited. I felt no guilt.  None.  Fortunately for me, I’m not a liberal, so guilt never once rained on my lily white parade.  It rarely does. Instead, I looked at it as a challenge and opportunity.

Of course, there was the typical reaction from the expected parties: two prominent leaders of the black community in Minneapolis cried foul, and accused Timberwolves management of playing the race card; pandering to the white community to sell tickets. National media has covered the story with the expected fervor of any source trying to pique interest. Does is it look bad that a state stereotyped as being folksy and “aw shucks” and whiter than rice has a professional basketball team that more resembles ticket holders to a Barenaked Ladies concert? You betcha. Does it sell more tickets at the dilapidated Target Center? Probably. Does it have more hockey starved rednecks looking forward to the next televised hoops game than if we had Batum, Wes Johnson, Anthony Tolliver and Corey Brewer our there? Perhaps.  There’s no way to really know.

I know we have our share of closed minded people here. You can’t go far in this country without finding some. Ask yourself, though, is it any more ridiculous that Minnesota should have a preponderance of white basketball players on its team than entire wards and precincts in Chicago, Cleveland or Philadelphia would give ZERO votes to Mitt Romney? I’m not trying to play the reverse racism card here, I’m simply saying that it is not so absurd to think that sometimes we enjoy seeing those who are like us succeed, whether it be color, creed or gender. In the end, though, it shouldn’t matter. Sport shouldn’t be about black or white. It should be about talent and desire and the will to win, and if this is what it takes to win a damn playoff series or two, then congratulations Mr. Kahn.

Besides, if it was really about finding more players that the people of Minnesota could relate to, don’t you think Chris Kaman would be here by now?