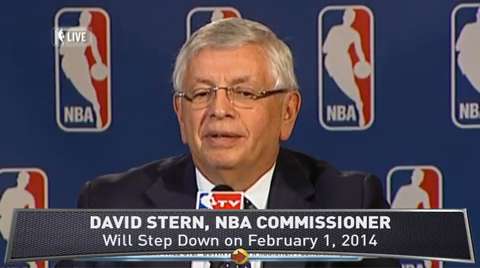 I’ve criticized David Stern numerous times. If you go back into the lockout archives, I’m sure you can find places where Jacob or I called him not-very-nice names. What can I say, he was a driving force that took basketball away from me for awhile. I was grumpy. It’s only fair then, to acknowledge when he gets things right.

Unlike the commissioners of other professional sports (looking at you Bud Selig) Stern has never been out of touch. Sure, he’s been a disingenuous windbag trying to break the back of the player’s union, but he was at least self-aware while doing that. Stern has always been aware of the flaws and the strengths of the game of basketball, and has usually tried to eliminate the former and promote the latter.

In what is likely to be his final big address to the media, the annual NBA Finals media address, Stern’s big picture thinking was on display. Instead of continually asserting that the NBA’s flawed replay process doesn’t need fixing (like the MLB is doing with a much worse replay process), Stern acknowledged that it is slow and drags down the speed of the game. He also said that during the offseason the league is going to look at offsite review by replay officials, similar to how the NHL operates. On the topic of flopping—unlike many firebreathing columnists—Stern recognized it for what it is: annoying but not the end of the world. As he said, “We could end that immediately if we decided to suspend players, but that might be a little bit draconian at the moment.” A little bit draconian indeed. What is it with this “things were tougher in the old days” bullshit? For awhile I just thought it was sycophantic Kobe Bryant fans denigrating anybody that suggested he is anything other than the best basketball player alive. But now former NBA players—who should know better—are getting into the act.

First, Karl Malone was asked to name his “best of all time” team and did not include Michael Jordan. He later retracted his list and said it was a joke, sort of. Next Dennis Rodman asserted that if LeBron James played the 1980s or 1990s he would be merely “average”. Finally, when asked to choose between Kobe Bryant and LeBron James (assist to a stupid question deisgned to drum up a stupid debate from a reporter), Dr. J chose Kobe Bryant.

The lesson, as we should already know from Joe Dumars, Michael Jordan and other great players turned executives, is that skill at playing basketball doesn’t necessarily mean skill at evaluating it. By any reasonable metric, Michael Jordan is a top 5 NBA player and the best shooting guard of all time. By any reasonable projection, the NBA talent level (and the talent level for any sport really) continually improves, and even if it didn’t, James would be great in any area. By any reasonable analysis, the answer to the stupid Kobe vs LeBron question is “give it six more years and see how many titles James has then”. By all means though Hall of Famers, continue to shove your foot up your mouths.

Kevin “Franklin Mieuli” Draper was born and raised in Oakland, California, and loves it more than you can possibly imagine. Follow him on Twitter @kevinmdraper
View all posts by Kevin Draper →
This entry was posted in Diss Guy Miss Guy and tagged David Stern, Karl Malone, LeBron James, Michael Jordan. Bookmark the permalink.