Editor’s Note: This is a guest piece by Omar Bagnied.  Omar is a frequent contributor to The Diss.

It’s been a rough couple decades for basketball in Minnesota.  It wasn’t always this way.  Back when the Lakers were in town, the Minnesota basketball franchise was a dynasty, winning five championships in six years (1949, 1950, 1952, 1953, 1954).  As many a Minnesotan grandfather might say, THOSE were the days.

Fifty-two years ago, the Lakers picked up and moved to sunny Los Angeles.  And who would blame them, Minnesota is a veritable freezer.  But the good people of Minnesota should be thankful; unlike other states, their patience was rewarded with a second chance at basketball glory.  In 1989, the Timberwolves arrived.  And man were they psyched about this team.  In their expansion season, the team drew over a million fanatics at the Metrodome.  The first home game alone drew 49,551 people, which remains the third highest in NBA history until this day.  Unfortunately, the Timberwolves lost that game.  And with that loss began all too familiar pattern.

Alas, NBA basketball had returned to the Twin Cities.  But the presence of the team became just that, a presence.  They were not a good team.  These wolves wandered aimlessly, struggling to remain afloat past February in the land of ten thousand lakes.  Year, after year, after year, after year, after year, after year, after year.  Then a high school kid from Greenville, South Carolina gallantly rode in to town on his white horse (yes, they still ride horses in Greenville) and said, ENOUGH.  Sadly, as we all know, the horse is an antiquated form of transport.  So while the Timberwolves did reach the playoffs seven straight seasons (1997-2003), the rest of the league pompously zoomed past them, leaving a cloud of dust in the first round every year.

Then in 2004 it all changed.  Kevin Garnett had grown tired of the losing.  He was better than that.  As he carried the franchise that season, the league took notice.  He was named the league’s Most Valuable Player, the first in Minnesota’s history.  After fourteen years, seven losing season and seven straight first round exits, the Timberwolves finally made it past the first round.  Finally, there was cause for excitement in Minneapolis.

The Timberwolves were a juggernaut!  Sam Cassell’s veteran leadership, the sharp-shooting Wally Szczerbiak and Latrell Sprewell’s electric swingman play all came together at the right time.  They rode through the first round, defeating the Denver Nuggets (the team that beat them in their first ever home game at the Metrodome) four games to one.  Uncharted territory was before them.  The Timberwolves were set to face the Sacramento Kings, in the Western conference semifinals.  A back and forth series, it was to be decided in a seventh and final game.  Kevin Garnett did not disappoint.  With 32 points, 21 rebounds and 5 blocks, he validated his MVP award. and propelled the franchise to its first Western conference final.  Not a terrible birthday present considering he bought it and wrapped it himself.  More than celebration, it was a sense of relief that enveloped the Target Center.  After years of suffering through the losing seasons and perpetual first round letdowns, it was their time for championship glory.  To return to the days of the early 1950s when Minneapolis was the king of basketball in America.  Their Western conference finals matchup was perfect.  Poetic.  Who better to inspire that city, those fans and the Timberwolves franchise than the team that abandoned Minnesota for the warm California coast.  The state was set.  This was going to be their year.

The Lakers proved to be a more than worthy opponent.  They flexed their championship mettle.  It did not end well for the Timberwolves.  If Minnesotans resented the great Kareem of the 1980s, the one that should’ve turned Minneapolis and not Los Angeles into the mecca of basketball, the came to despise the Kareem of the 2004 Lakers. 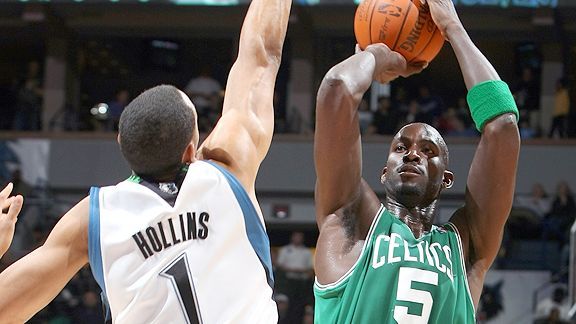 That loss ushered in the current era.  Kevin Garnett had nothing left to give Minnesota.  Management consistently failed to surround him with quality talent, and he could not handle losing anymore.  The youthful exuberance and extraordinary athleticism that drove him for eight years, culminating in a Western conference finals appearance, turned into anger and despair.  He demanded a trade out.  The people of Minnesota knew it was coming, and for the most part, they didn’t blame him.  He had given them everything he had to give.  Little did they know how long it would take for them to recover from his loss.

Eight years.  And counting.  Eight years of chatter like this amongst Timberwolves fans.  But no one is more frustrated than the man trying hardest to change the franchise’s losing ways.

Kevin Love is now the man in Minnesota.  I don’t know that we’ve ever seen his type of talent in the league.  A 6’10”, 260 pound three-point shooting champion.  A rebounding machine.  A franchise scorer that delivers in the clutch.  Rugged.  Reliable.  A player you build a franchise around.  But after four years of playing his butt off, he too has grown tired of management’s failure to surround their stars with complementary pieces.

Kevin Love is now playing for USA basketball, primed to defend their title in this summer’s Olympics in London.  As players on that team rib one another, recounting playoff battles, Kevin Love sits quietly.  Like a poor kid that, despite his parents’ alcoholism-induced plunge into poverty, has studied his ass off and earned a scholarship to attend private school.  And now that he’s been exposed to an elevated human experience, he will not accept the regressive situation back home.

Minnesota, it’s simple: If you do not change your apathetic tendencies, if you continue to accept mediocrity and remain unwilling to obtain the resources necessary to chase a championship, Kevin Love will leave you, just as Kevin Garnett did.  Other teams in the league are moving heaven and earth to bring quality pieces to complement their franchise players.  See how the world champion Miami Heat went out and grabbed one of the greatest shooters in league history?  Taking note of what OKC did bringing in Perry Jones III to augment their Western conference championship squad?  Brooklyn is purging their entire team so that they can create room for megastars to complement their franchise player.  Do you see what they’re doing there?  Do you see how this winning thing works? You realize Kevin Love is from Los Angeles, right?  You realize that he went to UCLA and his dad played for the Lakers, yes?  How ironic that Kevin’s high school team was the Lake Oswego Lakers.  You don’t think that Kevin Love has always dreamed of playing for the Los Angeles Lakers?  When he hit that game-winning three at Staples, he was auditionimg.

Why do they always want to leave you for Los Angeles, Minnesota?  The Lakers franchise did it.  Kevin Garnett wanted to.  All the pieces are there for Kevin Love’s glorious return to Los Angeles.  Reverse the pattern, Minnesota.  Study your heritage.  Minneapolis was once proud of their basketball team.  You were world champions, the orignal dynasty of professional basketball’s lone super-power.  As you sit there toiling in mediocrity, cities like Seattle yearn for a basketball team, any basketball team.  You know what it’s like to have an NBA team taken away from you for thirty years.  If you lose Kevin Love, don’t be surprised if it’s taken for good.